A 1-4 Scourge of the Slavelords, Dream Speak 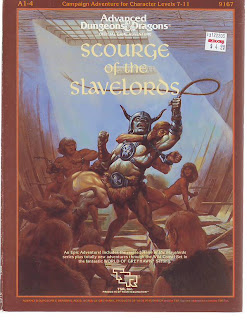 I have never run this module but I ran the originals that it was  based off of. As I recall A1 was the first module that i ever  bought. I think I ended up running X2 first for some reason. It  was most likely because I had just got done reading the Amber  series and somehow connected the two.

The compiled edition contains revised editions of the modules and  I really am not sure of the differences. I will have to pull them  all out of storage and compare them sometime. I like how they  made it a followup to the ToEE though I seem to recall coming of  the the Temple higher than seventh level. It may have been that we  did some side adventures but I really can't remember them.

I am not sure which way I would go today if I had to but them.  The combined module is nice and the tie in makes it convenient.  There is something to be said for owning the originals though.  Being a purest I might go with the four stand alone modules and  play them as they were intended and not as a continuation of the  ToEE.

"Screams echo in the night, the charred remnants of a village are  mute by day. From the decaying lands of the Pomarj, slavers have  struck again!

The adventure that began in the Temple of Elemental Evil now  sweeps southward across the Wild Coast and into the desolate  lands of the inhuman Pomarj. Slave raiders scour the countryside,  leaving death and destruction in their wake. Daring adventurers  strike into the heartland of the foe to harry the villains and  bring retribution and justice to the land.

This product contains the completely revised Aerie of the  Slavelords series of adventures. Also included are new challenges  and new scenarios detailing the Wild Coast, the city of Highport,  the blasted lands of the Pomarj and the Drachensgrab Mountains.

With the beginning found in Temple of Elemental Evil, your  campaign adventure can lead characters from 7th level all the way  to 11th and beyond! Hours of adventure and excitement lie between  these covers!"

This spell will require that the magic user cast it on a creature that is already asleep. The sleep can be a natural one or one that was caused by a spell or magical effect.

When the spell is cast the magic user will be able to ask questions of the sleeping victim. The questions must be ones that are direct and can easily be answered. Asking them what the plans of their master would not be something they could answer but asking where their master plans to attack would be allowed.

The spell does not allow the creature to speak or understand languages that they would not normally know. The victim will answer the questions as truthfully as they can though only answering the questions ask of them. They are not compelled to volunteer any information other than direct answers to direct questions.

Disclaimer: The spells that you will see, for how ever long the write ups last, were all written up or conceived of back in the 80's so the terminology may not appropriate for anything other than 1e and depending on how well I did back then it may be slightly off for that as well. If there is any duplication of spells that exist now it is most likely I wrote mine first :) Please feel free to comment on them but try not to be too hard on me. If anyone wishes to use these in anything they print please let me know in advance and all I ask is proper credit.
Posted by Wymarc at 5:39 AM