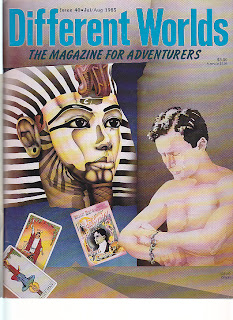 The Magazine For Adventurers

When this spell is cast the magic user makes it possible for  themselves and any in their party to track the path of the target  creature. This will allow tracking even if there is some other  magic in place that would make tracking impossible.

The spell will cause the target creature to leave glowing  footprints on whatever surface they come in contact with. If they  use a mount then the mount will leave footprints as well. In  cases where the target flies or even teleports a solid glowing line will trace their path. Only the caster and their party can see  these footprints or lines.

The material component of this spell is a lightning bug. The bug  must be crushed and smeared on the ground at the feet of the  caster during the casting of the spell.

Disclaimer: The spells that you will see, for how ever long the  write ups last, were all written up or conceived of back in the  80's so the terminology may not appropriate for anything other  than 1e and depending on how well I did back then it may be  slightly off for that as well. If there is any duplication of  spells that exist now it is most likely I wrote mine first :)  Please feel free to comment on them but try not to be too hard on  me. If anyone wishes to use these in anything they print please  let me know in advance and all I ask is proper credit.
Posted by Wymarc at 5:25 AM