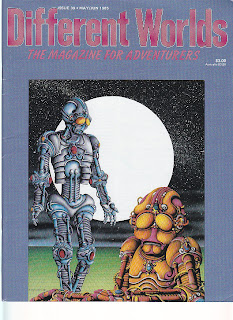 The Magazine For Adventurers

When this spell is cast the magic user is able to see through the  eyes of another individual or even creature. They can then  continue to make this occur multiple times until there is no  longer a valid target for their vision to jump to.

The caster's vision must jump to a target that is not in their  vision. If the target does come into their field of vision the  spell is broken. The range that their vision can jump each time  is 1" per level of experience. The caster can specify an initial  direction for the spell to go towards but after that the direction  will be randomly determined until a target can be found.

Once the caster's vision has jumped they will see what the target  of the spell is seeing. The target of the spell will also see  this and be none the wiser as to the fact that their vision is  being shared. The caster has no influence on what the target does  or where they look.

The caster can make their vision jump at any given time. The  range it can jump will still be 1" per level of experience. Once  a connection is made their is no limit on the maximum distance a  target can move away from the caster. The spell will remain in  effect as long as the caster maintains concentration.

The material component of this spell will be a preserved human or  demihuman eyeball. It must come from the same race as the caster  and the individual it came from will need to have been someone  who had reason to use their eyes for nefarious reasons.

Disclaimer: The spells that you will see, for how ever long the  write ups last, were all written up or conceived of back in the  80's so the terminology may not appropriate for anything other  than 1e and depending on how well I did back then it may be  slightly off for that as well. If there is any duplication of  spells that exist now it is most likely I wrote mine first :)  Please feel free to comment on them but try not to be too hard on  me. If anyone wishes to use these in anything they print please  let me know in advance and all I ask is proper credit.
Posted by Wymarc at 7:05 AM