Beyond the Prism Pentad, Match Fire 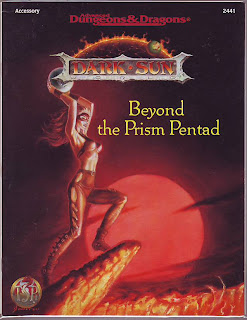 I have heard many people say good things about the Dark Sun  setting over the years. I know that it was one of my brother's  favorite settings. It is something that I have bought over the  years but in all honest I am not sure that I have ever read any  of the products all the way through. This will mean that I am not  able t provide a fair and objective opinion.

For that reason I will not drag out the what I am writing today.  This is more of a supplement than it is a module. It is from what  I have been able to determine very much a means to summarize what  has happened in the setting up till it's release as there were  some fairly significant changes apparently after it. There si  also a short module contained in the book.

Most of the reviews I have seen for this are not favorable. There was one series of exchanges that said it had the distinction of  having the worst module ever released for the setting. In the end  except for having it to complete the product line I am not sure  it is needed. It can be found cheap though so it is not going to  break the bank to find out if it is as bad as is suggested.

It will be tough call if I read up on Dark Sun or Eberron first!

The relentless passage of time sweeps across the burning plains,  and the world beneath the crimson sun changes in its wake...

The Dragon of Tyr is gone, his evil scattered on the scalding  winds. Torrential rains fall over the Sea of Silt, spinning off  deadly storms that can strike anywhere in the Tablelands with  only a moment's notice. Violent upheaval rocks the city-states of  Raam, Draj, and Balic after the deaths of their sorcerer-kings. A  new age has dawned on Athas, but will it be an age of  restoration--or of destruction?

Beyond the Prism Pentad summarizes the key events from the Prism  Pentad novel series and role-playing game products and updates  all DARK SUN campaigns in anticipation of the revised campaign  setting, DARK SUN: A New Age, featuring:

- The key events of the first 10 years of campaign time, with a  detailed timeline of historical events.
- Updates and details on the changes in the world, including the  seven city-states of the Tyr Region.
- Statistics for the major personalities, including Rikus,  Sadira, and the remaining sorcerer-kings.
- A short adventure to tie player characters into the events of  the climax of the Prism Pentad series.

What forces have seized control of Raam and Balic? Who is the  real power behind Draj? How are the citizens of Tyr handling  their second decade of freedom? The answers to these questions-- and many more--are awaiting you.

When this spell is cast the magic user is able to make a magic  item they posses become in all ways similar to one that they see  another person using. This spell in no way affects the item that  is being copied/cloned.

The caster must have the same type of magic item that they want  to match so this will prevent unique items from being copied. To  copy a wand the caster will need a wand and to copy a rope they  will need an existing magical rope.  It would be possible for a  magic user to make a point of making a similar type item if they  knew in advance they would want to copy something. This spell can  not be sued to copy items such as relics or artifacts though  unique items can be copied.

The copied item will become an exact duplicate of the original.  This will mean that the number of charges are the same as well as  the activation phrases and other features that might be specific to  the item. The caster will know this information and will be able  to use the item immediately.

Use of this spell will have a permanent effect of the item that  transformed. The caster's item will remain in the copied form for  the duration of the spell. Once it expires the magic item will  lose all magical abilities.

The material component of this spell will the item that is  transformed. As previously stated the item is not destroyed by  the spell but it will lose all of its magical abilities once the  spell expires.

Disclaimer: The spells that you will see, for how ever long the  write ups last, were all written up or conceived of back in the  80's so the terminology may not appropriate for anything other  than 1e and depending on how well I did back then it may be  slightly off for that as well. If there is any duplication of  spells that exist now it is most likely I wrote mine first :)  Please feel free to comment on them but try not to be too hard on  me. If anyone wishes to use these in anything they print please  let me know in advance and all I ask is proper credit.
Posted by Wymarc at 6:09 AM