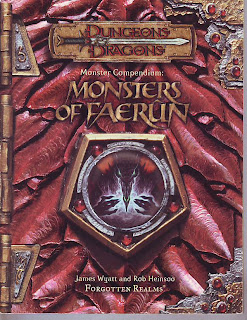 Monsters of Faerun is a book that I have never used. It is not possible to have too many books filled with monsters though. The conversion process to something I would use might be daunting though. I know that there are people out there that convert older modules into the newer editions. Is there any movement to do the reverse? I know that many of the newer items might not convert well but some of the things like monsters, magic items and spells would have to be easier.

Demons and half-demons, dragons and dragonkin, animated corpses and restless spirits, wielders of magic and eaters of spells: These are the creatures of Faerûn, the monsters of the FORGOTTEN REALMS(R) campaign setting.

Monster Compendium: Monsters of Faerûn contains scores of new monsters for use in DUNGEONS & DRAGONS(R) adventures. From the aarakocra to the Tyrantfog zombie, these monsters present a whole new range of challenges.

Although usable in any campaign, these monsters are especially suited for the FORGOTTEN REALMS setting--a world of great magic, terrible villains, and high adventure.

When this spell is cast the magic user will bestow an  invulnerability to missile weapons of all types as well as  selected spells that would qualify as missile weapons. In addition  the attacks can be redirected at others as a result of the spell.

All normal missile attacks will be affected by this spell. This  will not include missile attacks that would be area of effect from  a single projectile though. This will also affect missiles that  are spell based such as the projectiles from a Magic Missile  spell.

Disclaimer: The spells that you will see, for how ever long the  write ups last, were all written up or conceived of back in the  80's so the terminology may not appropriate for anything other  than 1e and depending on how well I did back then it may be  slightly off for that as well. If there is any duplication of  spells that exist now it is most likely I wrote mine first :)  Please feel free to comment on them but try not to be too hard on  me. If anyone wishes to use these in anything they print please  let me know in advance and all I ask is proper credit.
Posted by Wymarc at 5:28 AM