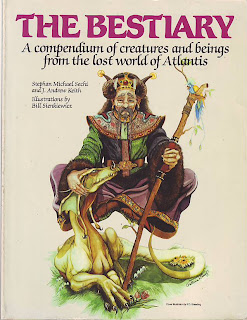 The Bestiary portion of the Atlantean trilogy is another of the books that I have never sued for the system it was written for but it has been well used. The book serves well as a point of reference for other game systems. I recall that the game system itself was one that I wanted to try but was never able to get a group that was interested in playing it over the system du jour. I know there are better uses for a time machine but I really wish there was some way to have gotten this system used when it was new.

"Return to the second age of Atlantis to a time wften the race of men was young, and giants still walked the earth... when ancient dragons lay sleeping beneath the ocean waves, and the woods of Avalon and Stonehenge were alive with the haunting songs of the magical Sidhe. Encounter the strange and wondrous inhabitants of a bygone age in the Bestiary.

• The Alicanto, a fabulous bird that feeds on precious metals
• The Zephyr, beautiful winged folk from the Continent of Mu
• The Hantu, so-called "earth-bound demons" of legend
• The Ahl-at-Rab, reptilian rulers of the desert sands
• The Kraken, fearsome monsters of the deep
• The Zazir, diminutive and industrious creators of nature's wonders
• And many, many more...

With a separate section for fantasy role players, featuring stats for hundreds of monsters and wild animals, lists of encounters, and much more..."
Posted by Wymarc at 2:53 AM 3 comments: 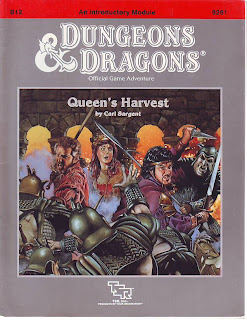 I wish I had a scan of King's Festival to post before this one but I inventoried it back in the day using a digital camera before I figured out scans would be better and most of those images are fairly bad. These are two modules I have never had the chance to play but I have been told by a number of people that they are both excellent additions to the B module line.

"The wizard Kavorquian is dead. But certain items belonging to his adopted son were in the wizard's keeping at the time of his demise. Now someone must venture into the silent vaults of Kavorquian's stronghold and recover the missing property.

Queen's Harvest picks up its story where B11, King's Festival, left off. It can be played as a sequel to that adventure or as a complete adventure in itself. It is tailored for beginning Dungeon masters and players and contains helpful hints on adenturing and the land of Karameikos. The story develops simply, but ultimately leads the player characters into the nether reaches of Penhaligon's politics to confront Ilyana Penhaligon, mad pretender to the throne!"
Posted by Wymarc at 2:07 AM 1 comment: