Birthright - Warlock of the Stonecrowns 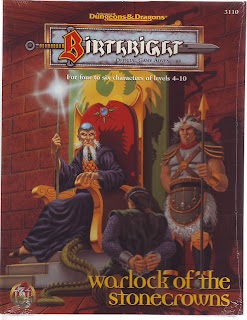 I am not sure if it is clear in the picture but this is one of those modules that I bought in  the secondary market that are still in the shrink wrap. Since I bought it after I had stopped  playing Birthright I have not been able to bring myself to open it. As a result I am not going  to bring any level of in depth insight out about this module.

The premise sounds like something that would work well for the setting. I used a similar idea  back in the early days of my Dm'ing. I want to say that it was planned out but back then I  would start a party going somewhere and then start to improv as needed. It involved Lolth and  the Codex of the Infinite Planes. She was using it to seal off the flow of magic to the various  planes of the multiverse in retaliation for her plans being thwarted in the GDQ series.

I think this is the last of the Birthright items I will have to talk about for a period of  time. I still have some others but they have not been cataloged yet.

High in the Stonecrown Mountains, a new source of dark magic stirs, wakes, and spreads its  wings to shroud the land in shadows. The Warlock of the Stonecrowns, an awnshegh regent who is  as evil as he is powerful, is draining other regents' sources of magical power, choking on  their ability to cast the most powerful form of magic of all--realm magic!

If that isn't enough, the Warlock threatens to close the only pass connecting the trade-kingdom  of Cariele to the rest of Anuire. An army of orogs and ogres is gathering to the Warlock's  banner: Are your heroes equal to the challenge of the twisted magic of the Warlock of the  Stonecrowns?

This open-ended, "adjustable" BIRTHRIGHT adventure is suitable for use with either mid-level  (4-6) or high-level (7-10) player characters. You must have a copy of the AD&D games rules and  the BIRTHRIGHT campaign setting to play.
Posted by Wymarc at 7:34 AM 1 comment:

Birthright - Tribes of the Heartless Waste 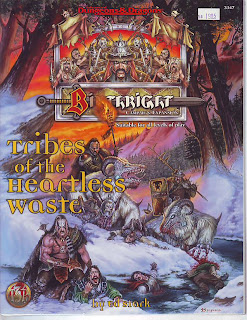 Tribes of the Heartless Waste is a product that I have not given the attention it deserves. I had wanted to give it more attention before I wrote about it but that has not happened and the likelihood of it happening given RL stuff is not likely to happen. I feel like this is not much of a post (I am right about that) but hopefully things will get better soon.

The threat of death lurks everywhere

Dmitri lost sight of his quarry in the gathering darkness and stumbled back from the carnage. Minutes ago, he and his comrades had been trudging homeward across the snowfield when, without warning, their guide plunged beneath the snow in a spray of slush and blood. By the time the ice borer attacks subsided, only Dmitri was left, himself beaten and bloodied from trying to save his friends.

The warrior broke into a run, aiming for a small stand of pines. Winter wolves howled a greeting to the night and sniffed the cold air. As Dmitri neared the trees, he could feel the snow beneath his feet softening with each step....

Vosgaard remains one of the truly unconquered, untamed regions of Cerilia. In the frozen landscape of the heartless north, only the hardiest will survive - and few of those will thrive. Would-be rulers face the double threat of Vosgaard's climate and its denizens, each dangerous on its own and deadly in tandem, neither willing to be conquered.

Even those who venture into the wastes only for adventure must step lightly. The snow-choked lands keep an icy grip on their secrets and their victims. Some say that only Belinik and Kriesha can hear the pleas of their faithful above the winter winds, leaving the region truly godforsaken.

This expansion to the Birthright campaign setting includes:

DM's Guidebook - 64 pages of realm and adventure information for Dungeon Masters.
Player's Chronicle - A 32-page booklet of history and domain details crucial to player character hero-kings.
New war cards for Vos, elf, and humanoid units.
A full-color map of Vosgaard.
Posted by Wymarc at 6:56 AM No comments: