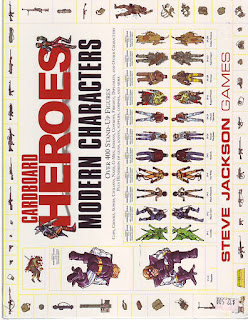 
. . . And whether these heroes are the costumed, super-powered type, the neighborhood fireman, or the Special Forces veteran - or something else entirely - you need a way to bring them into the thick of your modern-day roleplaying action. Cardboard Heroes Modern Characters has over 400 full-color, standup cardboard figures in 25mm scale, for a fraction of the price (and the weight!) of metal miniatures. You get soldiers and cops, Nazis and gangsters, cowboys and Indians, and lots and lots of modern-day civilians for all your games.

Cardboard Heroes Modern Characters also has hundreds of weapons, accessories, corpses, and other lie-flat counters to make your games even more vivid and realistic. So whether you're playing Old West, gangsters and G-men, world at war, espionage, covert ops, near-future, post-apocalypse, superhero, or any other kind of RPG set in the world of today . . . or thereabouts . . . we've got the figures you need!
Posted by Wymarc at 10:22 AM