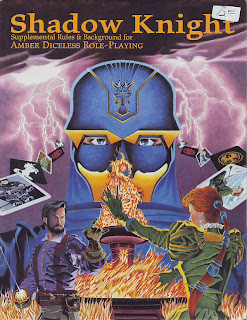 I have limited experience with the Amber core game system. I am  not sure when I picked this up but I expect it was after I ever  did anything with Amber as I never recall using it. I am not even  sure that I have read it all the way through. This is the one and  only published supplement to the Amber game. It has a loyal  following on the web so there may be unofficial products  available.

This book contains plot summaries from the Amber series and  information from the Merlin series which is the second line of  Amber books that Zelazny wrote. I read the original Amber series  sometime in the very early 80's if not the late seventies. I have  not read the second series.

Since I have not read or used the book I can't give it a personal  review. there is a review on rpg.net that paints it as a mixed  bag. In the end they suggest as I do that there are things that can be taken from this either in total or as inspiration even if  you are not going to use the book as it or for the Amber game.  You can find the review here:

When this spell is cast the magic user will cause the selected  targets to become indistinguishable from the dead. The appearance  of the victims will also be changed. The targets of this spell  must be willing for the spell to affect them.

The spell will affect a maximum number of creatures equal to the  caster's level. The creatures affected will have an upgraded  version of the spell Feign Death affect them. This version will  further reduce damage so that any attack will only cause 1 point  of damage and anything ingested will have no effect once the  spell wears off.

The appearance of the targets will be changed. The new appearances  will need to be humanoids and similar in size to what they  currently are. Weapons, clothing and armor will appear different  based on the will of the caster. The level of decay is also up to  the caster though appearing as skeletons is not permitted.

The affected can remove themselves from the affect at any time  and others will not be returned. The items that exist on the  targets will still be there and visible though the appearance will  be modified. It is possible for others to search and remove items  from the targets without their deception being detected though  the targets may want to break the spell depending on what is  being taken.

Disclaimer: The spells that you will see, for how ever long the  write ups last, were all written up or conceived of back in the  80's so the terminology may not appropriate for anything other  than 1e and depending on how well I did back then it may be  slightly off for that as well. If there is any duplication of  spells that exist now it is most likely I wrote mine first :)  Please feel free to comment on them but try not to be too hard on  me. If anyone wishes to use these in anything they print please  let me know in advance and all I ask is proper credit.
Posted by Wymarc at 5:53 AM