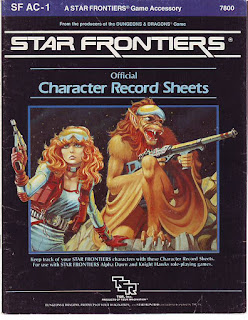 You're trapped on the outer reaches of a frozen, desolate moonscape. Your parabatteries are dead, and your Stamina is at a new low. Suddenly, a flock of winged rippers swoops down out of the cold, starry sky. You reach for your Laser Rifle. But wait! You're out of ammo! Way to go, Flash.
You forgot to use your character record sheets.

The new Star Frontiers® Character Record Sheets will help you keep track of your character throughout all your space adventures. The sheets include room for ability scores, weapons, defenses, skills, equipment, and mission notes. A set of 32 records is provided in this package, along with tips on how to use them. Room for recording spaceship skills, which are used in the Star Frontiers® Knight Hawks Game, is also included.

Don't let your latest frontier be the final one. Carry on with the Star Frontiers® Character Record Sheets, and boldy play where no man has played before.