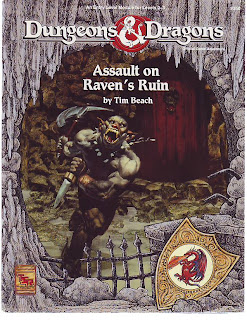 The Thunder Rift series is a line of modules that were designed  to allow novice DMs and players to cut their teeth as it were.  The line had a number of modules designed for it and these vary  in quality. Assault on Raven's Ruin falls into the middle of the  pack in my opinion.

The module was released in 1992 and is sixteen pages long. It  includes a poster map that can be used with miniatures as well as  fold up cardboard characters. The setting is an underground  mansion which has 15 or so distinct encounters. The mix is your  traditional split among rooms that are empty, contain monsters  and treasure or have just a trap or trap plus treasure.

There are eight other modules in the Thunder Rift line. A list of  these are below. In the end there is an option that will allow  the DM an opportunity to let the characters into either their own  world or one of the larger TSR settings. The list of modules and  the information from the back of Assault are below.

From the back of the module....

ATTENTION: ALL ENTRY LEVEL DUNGEON MASTERS AND PLAYERS! THE  SCEPTER OF TRUTH HAS BEEN STOLEN, AND A CALL HAS GONE OUT FOR A  FEW BRAVE HEROES TO BRING IT HOME

In the canyon of Thunder Rift, in the village of Kleine, goblins  have always been a nuisance, but the natives have dealt with them  and continued an otherwise peaceful existence. Now, a valuable  magical item, called the scepter of truth, has disappeared! The  ingenuity of the crime bears the mark of the goblins' leader, the  Master Thief Raven. The scepter must be recovered, but there is  no one in Kleine with the strength and courage to penetrate  Raven's trap-laden hide-out, deep in goblin territory. A party of  stout adventurers might survive the mission, but they will have  to be quick, smart, and especially careful.

This module has been created especially for the inexperienced  Dungeon Master and players who are interested in the exploration  of dungeons and ruins.

# Recommended for four to six characters, level 2-3
# A large map sheet and stand-up figures are provided
# Only the DUNGEONS & DRAGONS Game Box is needed to play this  adventure
# Can be used in conjunction with several other adventures and  accessories based in Thunder Rift, or it can stand alone
# Features easy-to-follow rules for smoother role-playing

This spell allows the magic user to create a magical staff that will be bound to them. This spell will allow the staff to have a special ability that is randomly determined. It will also allow the caster a number of free spells per day.

The staff when created will be bound with the magic users very being. If the staff is out of their possession for more than twenty four hours they will cast spells as if they were one level lower for each day it is out of their possession to a maximum of four levels. As a result of this the caster will always be able to determine the approximate location of their staff. If the staff is ever destroyed they will immediately and permanently lose one level of experience, one point of intelligence and 2-5 hit points.

The caster will need to spend twenty four hours in the casting of the spell. They will also be required to have a staff that is created specifically for the spell. The cost of the staff can vary but the cost should be no less than 500 gp. The DM can instead have the caster perform a minor quest to obtain the staff.

The staff will have the ability to cast a light spell at will for the caster. The spell will also allow the caster to imbue the staff with three different types of first level spells. The spells the caster can chose from are as follows:

The caster will be able to cast the spells a number of times per day based on their level. The table for this follows below.

In addition to all of the above the staff will have a randomly determined benefit that the caster will gain while the staff is in their possession and is being held. The options are outlines below

The material component of this spell will be the staff that the caster will bind to them. The caster will also need an assortment of rare herbs and incense. The cost of these will be no less than 250 gp.

Disclaimer: The spells that you will see, for how ever long the write ups last, were all written up or conceived of back in the 80's so the terminology may not appropriate for anything other than 1e and depending on how well I did back then it may be slightly off for that as well. If there is any duplication of spells that exist now it is most likely I wrote mine first :) Please feel free to comment on them but try not to be too hard on me. If anyone wishes to use these in anything they print please let me know in advance and all I ask is proper credit.
Posted by Wymarc at 5:24 AM

Just to make sure I am reading Magic Staff right. When you create it, you choose one spell of each type (U/D/O) the staff can cast and at each 'power up' you add another spell from each type. So, at 18th level you will have all of the spells available, yes?

For the spells per day, is that per spell or per spell category?

I loved Thunder Rift, but as always im my younger days I jumped on the #e bandwagon and dumped much of my old stuff...stoopid, stoopid me...sigh...

Isn't the Haunted Tower also a module for Thunder Rift? I've had that thing for years and had always been under the impression that it was, since it does start off in Melinir(sp) and the Tower itself seems to be marked the map of the rift. My apologies if you were just talking about the list from RR

@seaofstarsrpg It works as you said. You pick a set initially and then at each step you add more. The DM may want to randomize this but I would suggest not. The spells per day are spells in that group. One of the reasons I did not increase the Offensive.

@Eric I have sold so much stuff I wish I hadn't. Most often I have ended up buying it back for more than I sold it for. MERP was the worst for that though

@2eDM There are actually two of the boxed games that are for Thunder Rift unless I am mistaken. The one you mention and Goblin's Lair. I was just mentioning modules. The lists from RR? Not sure what the RR is.

Inspiring work from the 80's!