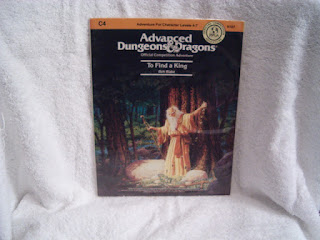 "Two centuries ago, the last king of the Celtic kingdom of Pellham was deposed in favor of a High Council. Now, however, things are going badly, and a restless populace longs for the days of the ancient kingship. The High Council is floundering - and the political situation is turning ugly.

It was then that the Brothers of Brie, an obscure monastic order, discovered a long-forgotten prophecy. In Pellham's time of greatest need, a long-dead king will rise to restore order. you have been chosen to prove that this is the time of the prophecy. you will take the first steps toward returning the lost king to the throne.

This adventure contains the first four rounds of a AD&D Open Tournament that was originally run at the GEN CON XVI Convention. it includes a tournament scoring system and a team of 10 characters of levels 4-7.

This adventure can be played alone, or as the first part of the two-part PROPHECY OF BRIE series."