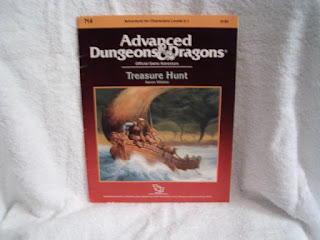 The island of Viledel, the mighty Sea King, was sacked by a pirate army sixty years ago. Its destruction was so complete that even the location of the island was lost and forgotten. Despite the rumors of immense treasures still hidden in the ruined stronghold, no one ever found the Sea King's island again.

Until now. Through the cruel twist of fate, a small band of unwilling adventures is washed ashore on a small, barren island, and discovers what remains of the Viledel's settlement. But they aren't alone; marauding orcs and goblins have found the island, too, and are frantically searching for the lost hoard. In this desperate treasure hunt, the real payoff may be survival.

Treasure Hunt is different from other AD&D game adventures. The player characters begin the game at zero level, without choosing a class, and must work their way up to the first level. It is perfect for a group of beginning players or experienced players looking for a new and different challenge.