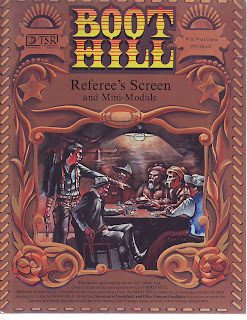 Fast-paced gunslinging action will never bog down in a search for missing tables with  the BOOT HILL Referee's Screen handy. Fourteen of the most used tables from the BOOT  HILL rulebook are arranged on this durable playing aid. A special 8-page BOOT HILL  adventure, Shootout in Northfield and other Famous Gunfights lets players recreate the  famous gun battle that destroyed the Jesse James-Cole Younger gang, plus six other  famous showdowns.
Posted by Wymarc at 6:33 AM