The Star of Kolhapur 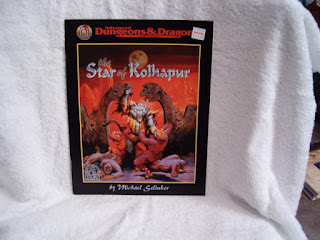 "When the fabled Star of Kolhapur gem is stolen, Rajah Shivaji is rightfully incensed. He blames the Thugs, vicious murdering worshipers of the black goddess Kali. But the thugs are not the only dangers in this land. Fiendish spirits wander the city, thieves prowl the streets of Kolhapur, and something even more sinister emerges at night..."