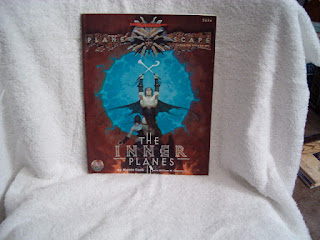 Beyond the Prime's infinite crystal spheres, beyond the endless realms of the Outer Planes, lies the absolute reality of the Inner Planes. The cornerstone planes of Air, Earth, Fire, and Water are the most well-known Inner Planes, but they're only the beginning. From the deadly purity of the Positive and Negative Energy Planes to the unbearable filth of the plane of Ooze to the eternal storm of the plane of Lightning, the Elemental Planes are the substance of existence itself. These eighteen planes form the foundation of the entire multiverse; they are the cauldron from which all energy and matter are brewed.

The Inner Planes details the Elemental, Para-elemental, Quasi-elemental, and Energy Planes. Surviving these planes can be a challenge, but within these pages DMs and players learn how characters can adventure among the unearthly locales and strange denizens.

This planar sourcebook includes:
• Detailed descriptions of the environments and regions of each of the eighteen Inner Planes.
• Rules for movement, and combat, and survival within these strange and unique environments.
• Information about the inhabitants and ecology of each plane, including elementals, genies, mephits, and even stranger beasts.
• Interesting and important locales within the Inner Planes, including such diverse places as the City of Brass in the plane of Fire, the Mountain of Ultimate Winter in the plane of Ice, the Refuge of Color in the plane of Radiance, and the mysterious, aeons-old abandoned towers of the Quasi-elemental Planes."