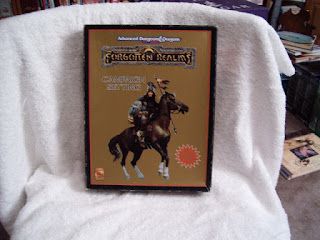 From the Back of the Box:

It is a world where the gods have walked and fantastic armies clashed. It is the home of Elminster, Alias, Azoun, Khelben, and Drizzt the dark elf. It is the most popular fantasy campaign in history. Well met, traveler, and welcome to the Forgotten Realms!

Designed for the AD&D game, the new Forgotten Realms Campaign Setting is a major expansion and complete revision of the original, best-selling boxed set. This set contains everything that a player or Dungeon Master needs to launch into a world of adventure and imagination.