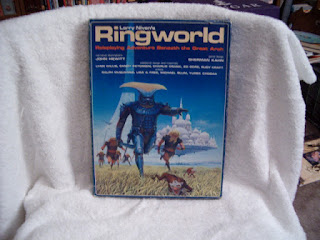 "The Ringworld science fiction role-playing game was published by Chaosium in 1984, using the Basic Role-Playing (BRP) for its rules and Larry Niven's Ringworld novels as a setting.

The players initially play explorers from Known Space, sent as scouts to the Ringworld. They can be anthropologists, artists, doctors, police, or even zealots, who will explore the mysteries of this huge artificial world and its inhabitants. Basic characters can be humans from a dozen planets of Human Space, Puppeteers, or Kzin. Later play can see characters from Ringworld species, such as the (so-called) Ghouls, Vampires, Giants, Sea People, and others.

Only two publications were ever published, the Ringworld role-playing game box set itself, and the Ringworld Companion, both in 1984 by Chaosium. The magazine Different Worlds, issue 37, featured a Ringworld adventure, "Louis Wu & His Motley Crew."

The Ringworld role-playing game box set was titled "Larry Niven's Ringworld: Roleplaying Adventure Beneath the Great Arch", referring to the way the Ringworld looked from its interior surface. It came in a box set with four books: the Explorer Book, Technology Book, Gamemasters Book, and Creatures Book, a sheet of cardboard miniatures, reference and character sheets, and a set of dice: 2d20, 1d8, and 2d6."