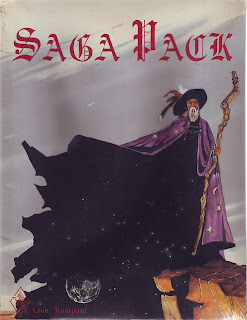 The Saga Pack is a combination GM Screen and supplement for the  Ars Magica game. The Saga Pack is for the second edition of the  game. There did not appear to be a screen created for the first  edition of the game. The product was released in 1989 by Lion  Rampart. Since the version I have is still shrink-wrapped I can  not speak about the supplemental material. Below is information  from the product itself.

• A 3 panel Storyguide's screen. With all the charts you will  need to play Ars Magica.
• 16 complete grogs, with fully detailed personalities (so you  don't have to roll them up yourself!), vivid examples of what  grogs can be.
• Numerous briefing sheets on the Art of Story Design, Life of  the Grog, Creating Companions, Limits of Magic, Mythic Europe™,  the Code of Hermes, as well as many excerpts from the various  Tomes of the Order of Hermes.

This spell enables the magic user to create a permanent zone  where magic will not function. This effect will apply to magical  items as well as to the ability for creatures in the field to  cast spells or use magical abilities.

Magical items brought into the field will become inert. They will  function as normal items of the same name but will not have any  functionality beyond that. Spell casters in the area will not be  able to cast spells while in the area of effect. Neither can  spells be cast into the area.

The field will be permanent once it is created. When the spell is  cast the magic user can specify distinct methods for the field to  be destroyed but these are often impossible quest level events.  Other than the caster specified method the only way to remove the  field will be through use of a deity and their taking direct  steps to eliminate the field.

The material component for this spell is the ground bones of a  Disenchanter Beast. The powder will be mixed with other rare  materials. The total cost of this should not be less than 1000gp.  The DM may require that the caster obtain the items personally.  The combined power will be used to outline the field area.

Disclaimer: The spells that you will see, for how ever long the  write ups last, were all written up or conceived of back in the  80's so the terminology may not appropriate for anything other  than 1e and depending on how well I did back then it may be  slightly off for that as well. If there is any duplication of  spells that exist now it is most likely I wrote mine first :)  Please feel free to comment on them but try not to be too hard on  me. If anyone wishes to use these in anything they print please  let me know in advance and all I ask is proper credit.
Posted by Wymarc at 5:47 AM

First edition Ars Magica will always hold a special place in my heart. The magic system was a nice innovation post Chivalry & Sorcery, and it was fun doing some illustrations for the first adventure.