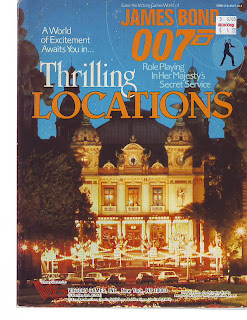 James Bond as movies seem to be something you either love or hate. I fall into the former camp. I have know I have seen every Bond movie and have seen most more times than I care to share. I know part of it is the action in the movies. There is also the great gadgets and then there are the ladies but in the I think it is something else. Bond movies are like travel brochures of great places many of us will never get to go. But then again the ladies aren't bad either.

Released in 1985 Thrilling Locations presents the GM with information on locations that seem to be common in all James Bond movies and will most likely be ever present in the game if it holds true to the genre. The book has two major sections. The first is Where to Go and the second is How to Get There.

The book presents these locations and methods of travel broken down into chapters that go over the different types for each. Each chapter will have at least one sample for it provided. It will then have something specific to that type of location that can be added to the game. Each will then have a "Notes for the Gamemaster" section. They will then present encounters that would be specific to that location. The chapters are then rounded off with NPCs that would be present and floor-plans. The various chapters are:

Where To Go
Casinos
Hotels
Restaurants

How to Get There
Trains
Boats
Planes & Airports

As nice as the sample locations are I think the book actually shines in a couple of other portions. The sections specific to that chapters such as in Casinos it is Gambling offer great ideas for the GM on creating new locations or information to help in designing adventures. The other section is the Encounters section. When I hear or see Encounters I go right to combat but these are better thought of as plot hooks.

In the end this is a great book for the James Bond game. It will also be something that any Modern type game could be well served using. The one flaw is that being published in 1985 is is 26 years old and some of the information might need to be tweaked and updated to be true to today's world. Don't let that deter you though. If you like the world of Bond, spy based games or have any need for modern era game information this will be of use.

This spell will allow the magic user and others to travel between  two locations in an instant. Both locations will need to have some  sort of open flame present. The size of the flame present in either  location will not be important and they need not match.

The travel between the two points will be handled differently  depending on how the caster is using the spell. If the caster  knows the location of the destination flame the distance between  the two flames can be up to one mile distant.

If the caster does not know the location of the secondary flame  then distance will be limited to 300 yards (90"). The caster will  have no information about the area surrounding the destination  flame. The DM should map out all the open flames location in the  area of effect with no other information except dots. The caster  can then pick any one of those in range and that is where the  group will appear.

Disclaimer: The spells that you will see, for how ever long the  write ups last, were all written up or conceived of back in the  80's so the terminology may not appropriate for anything other  than 1e and depending on how well I did back then it may be  slightly off for that as well. If there is any duplication of  spells that exist now it is most likely I wrote mine first :)  Please feel free to comment on them but try not to be too hard on  me. If anyone wishes to use these in anything they print please  let me know in advance and all I ask is proper credit.
Posted by Wymarc at 8:48 AM

That's a brilliant spell, for the very evocative core idea and for the attraction of the mapping. Plotting the dots forces the GM to think hard about what's going on nearby and gives the party plenty of info too, with potential for distraction and side quests.

One thing that the players may not take into account also is that the points could be mobile such as denizens carrying torches and that the 900' is not limited to a single dungeon level.