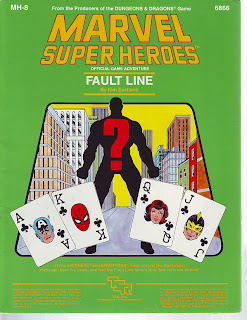 I have written a couple of times how my superhero game of of  choice was V&V but we ended up playing Champions. In the comic  worl I have always been more in the Marvel camp than I have in the  DC camp. It is odd that we did not play more of Marvel Super  Heroes given that. I think it was because the other person who  GM'ed other than me and ran most of the non D&D stuff was a  Champions fan.

Fault Line (MH-8) is one of the adventures for Marvel Super Heroes  than I own but have never really played. There are some of the  modules for the game that appeal to me much more than others. This  is actually in the group that does not appeal. I am not sure it is  the least appealing but it is close. I think the mixture of the  characters in the module seems a bit contrived and unless played  as a one shot then it will most likely never work.

The plot in the module is one that when written did not seem like  it was that catastrophic. In the post 9/11 world the plot is one  that I am not sure I would want to use in a campaign I was  running. I won't talk any more about it but I think what I have  written already explains it. This is most likely going to be a me  issue being over sensitive to the location. It just wouldn't be  anything I would use in a game anymore.

This module uses a different format than the previous modules  released for the game. Previous modules used chaptered adventures  that most often needed to be run in sequence. This module is  written in a format that uses a timeline and events. This seems at  least in theory make the adventure more variable in nature.

The module itself is short coming in at 16 pages which as I recall  in 1985, when it was released, was short for a module of that time  period. The content of the module is well done and the write up  for various location in the city would serve the GM well. Even if  you never run it I am going to guess some of the flavor material  could be used. The two sided map works with the one in the basic  set so that is a benefit as well. The mix of heroes again is one  of my concerns but it was nice to see the Black Knight get a nod.  In the end I would say you can pass on it as a scenario but maybe  own it for the parts.

"Three AVENGERS and SPIDER-MAN must unravel the mysterious  message, beat the clock, and find the Fault Line before New York  runs out of time!"

They are the last words of a dying man. "Fault... Line." What  do they mean? How does it threaten New York? Who would kill to  keep it a secret? Is there a rupture in the foundation under the  Big Apple, or is there another meaning lurking in the cryptic  confession?

Can SPIDER-MAN, CAPTAIN AMERICA, the WASP, and the BLACK  KNIGHT save the city from certain destruction? Can the heroes  solve the mystery, find the villain behind the evil plot, and beat  the clock before the mighty metropolis runs out of time?

When this spell is caste the magic user causes the target item  touched to decay rapidly. The change in the item will occur over a  period of one round. The effectiveness of this spell is going to  depend on the item it is used on.

The spell may only be cast on a non-living item. It can be used on  organic items that were once alive though. When the spell is cast  the affected item will age 100 years plus an additional 100 years  per level of the caster. Depending on the item this may or may not  have an effect. The GM will need to determine exactly how the item  is affected. The decay affect will be such that it will determine  if the slain can be affected by clerical spells where the time  period dead is an issue.

The reverse of this spell will allow the caster to cause the touched item to be restored back a similar period of time for aging/decay purposes. If the item is newer than the time it would be  restored back it will be restored to a state as if it were new. This being used on a  corpse will restore it back to a state it was in for the period  of time and again if dead less than that the corpse will be as if  it was just slain. This will also affect the ability of the corpse  to be affected by clerical spells. This spell can not affect the  undead.

The material component for this spell will be a small pinch of dust  from a tomb or grave that is at least as old as the spell will age  an item. If used to age the item then the dust will not be  affected and can be reused. If the reverse of the spell is cast  then it consumes the dust.

Disclaimer: The spells that you will see, for how ever long the  write ups last, were all written up or conceived of back in the  80's so the terminology may not appropriate for anything other  than 1e and depending on how well I did back then it may be  slightly off for that as well. If there is any duplication of  spells that exist now it is most likely I wrote mine first :)  Please feel free to comment on them but try not to be too hard on  me. If anyone wishes to use these in anything they print please  let me know in advance and all I ask is proper credit.
Posted by Wymarc at 5:54 AM

It's weird. You would think since I am a comic book collector and and RPG collector I would go all crazy and try to find all these Marvel modules. Especially considering a few of the have John Byrne art not available anywhere else.
But most of them aren't really that good. I mean, they were cool at the time. But these days I could create much cooler stuff.