B2 - The Keep on the Borderlands 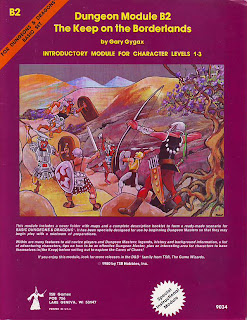 There is not much more that I could add to what has already been said about the #7  ranked module of all time. I am actually more of a fan of B1 In Search of the Unknown  more than I am of B2. Please don't get me wrong but I like the good old fashioned  dungeon crawl factor of it. That and it has some things that became "standards" in  dungeon design. But I digress.

There have been incredibly more pages written about "The Keep" than there are to "The Keep". If you  factor out the useful DM material and resources this is further exaggerated. There are innumerable detractors of the module and it does have some issues. The ecology of the area is  about as impracticable as it could be without being a zoo. Still that is the way it was  some 32 years ago. Anyone who hates on the module really needs to learn to respect what has come before and appreciate the classics that laid the groundwork in a fledgling industry.


It was pointed out the review I mention below may have been meant as comedy. If so I misunderstood. I apologize if that is the case but I still hold true to the other comments about the newer stuff not holding up and the sue of the phrase Pirates of the Coast. Teach me to not look at Tags won't it!

I want to point on in the review here Mike Mearls told us in no uncertain terms how bad it was. I quote him as saying "It really is too late to warn you about this one, isn't it?" and "If you paid for it, you got ripped off". Not railing against 3e or 4e or whatever the next edition whose sole purpose is to bleed money off of people is but pointing out that this module will have more staying power than anything produced by Pirates of the Coast.


The other review on that site is a little more kind but wants to make fun of something Gary Gygax wrote. I have copied that below here but want to point out that James Landy gave much better reviews to a number of Pirates of the Coast and 3e modules that are really pretty bad. But below is what Gary Gygax with all his pretensions (his words) wrote...thank you for inspiring Gary rather than directing:

"You are not entering this world in the usual manner, for you are setting forth to be a Dungeon Master. Certainly there are stout fighters, mighty magic-users, wily thieves, and courageous clerics who will make their mark in the magical lands of D&D adventure. You however, are above even the greatest of these, for as DM you are to become the Shaper of the Cosmos. It is you who will give form and content to the all the universe. You will breathe life into the stillness, giving meaning and purpose to all the actions which are to follow."

I have no qualms saying that this is a module that everyone should own. Not only  because it is a worth owning and being run through or running by all at least once in  a gamers life but because it is a piece of history. I feel certain that in 2033 there  will not be one 3.x module that is considered in such regard as this one. If there is  please let me know so I can but it now.

Excerpt from the adventure:

The Realms of mankind is narrow and constricted. Always the forces of Chaos press upon  its borders, seeking to enslave its populace, rape its riches, and steal its  treasures. If it were not for a stout few, many in the Realm would indeed fall prey to  the evil which surrounds them. Yet, there are always certain exceptional and brave  members of humanity, as well as similar individuals among its allies - dwarves, elves,  and halflings - who rise above the common level and join battle to stave off the  darkness which would otherwise overwhelm the land. Bold adventurers from the Realm set  off to the Borderlands to seek their fortune. (...)

You are indeed members of that exceptional class, adventurers who have journeyed to  the Keep on the Borderlands in search of fame and fortune.
Posted by Wymarc at 1:42 PM

yep, Mike hated it so much, he used it to playest 4e at DDXP Con

From EnWorld: The Caves of Chaos is part of the classic adventure Keep on the Borderlands used by WotC for the D&D Next playtests at DDXP.

If you take a close look at the Mike Mearls review you will notice the Genre is Comedy. He wrote the review as a humor bit not to be taken seriously.

It's your blog, but the page load is over 60 seconds for IE, and I can't get it to complete loading in Firefox (admittedly I run with NoScript) at all. Watching the bottom bar, I think it may be the google friend connect and google +1 buttons.

I'm only complaining because I "breadcrumb" through OSR blogrolls and yours is the only blog I've tried to read for weeks that grinds like this.

While I'd like to continue to visit, it's just too frustrating.

Biker...I am not sure how to go about turning those off to test your theory. I also have the slideshow application which can take some time to load. If anyone know how to disable what is suggested as the cause I would be willing to try it. I would also like to know if others have problems with the blog not loading properly.

Actually Mike Mearls's criticism of this Module is unfounded. The Caves of Chaos far from being a Zoo are more like an armed camp under the leadership of the Evil Religious cult holed up in the Caves - preparing for some major strike against a center of civilization.

Imagine Warbands Raiding from these Caves-and because I tied it to Horror on the Hill (a second Humanoid Stronghold led by a cleric of an evil cult) along with Eldwyns Sanctuary from Castle Caldwell and Beyond (a third stronghold full of Evil Clerics) thus becoming a major effort on the Part of the Evil cult to Carve out their own Theocracy of Chaos in the fringes of whatever Kingdom you were adventuring in it is the Dungeon Master that Makes this Adventure Module (and others) what it can be...If Mearls saw a Zoo with little use or justification to him that is purely a reflection on him as a Bad DM.