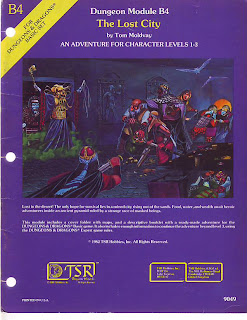 Yesterday I wrote about B2 the #7 module in Dungeons all time list. Today I will write  a little bit about #28 which is B4 The Lost City. I will also try to not go off on  tangents and slander anyone's reviews or their life's work. I said try so lets see how  that works out for me.

The Lost City is written by Tom Moldvay and I think most everyone will recognize the  name and as a result what they have contributed to the game. I remember reading a Blog  some time ago where the author of the blog was going to sue this as the basis for a  sandbox campaign. This module more than any of the other B series would be suited for  this purpose though B7 could be used as the foundation for a campaign as well with  very little work.

This is a module where actually only a portion of the entire area is written out in  any detail. The reminder has suggestions and broad strokes laid out but the specifics  are left to the discretion of the DM. The module also featured information on how the  DM might get the characters to interact with the NPC and suggestions on how that might  work out. All of these make it very well suited as the foundation for a campaign where  the DM can place their take on it.

There will be those that will suggest that I am partial to the older material. To  argue with that assumption would be sill as I will go on record that in this case  older is better. I think technology improves with time but as far as gaming material  is concerned once you get into the later 80's and early 90's I think things had gone  down hill. If you don't own this module pick it up I will think that those who are  disappointed in the investment will be few and far between.

Lost in the desert! The only hope for survival lies in a ruined city rising out of the  sands. Food, water, and wealth await heroic adventurers inside an ancient pyramid  ruled by a strange race of masked beings.

I know there was some discussion on one of the Greyhawk lists about using B4 as the basis for a Sea of Dust campaign. (Which is a part of the setting where an ancient civilization was utterly devastated and laid waste by powerful magic). I think it is a good match, but I always liked this module wherever it was set.

Jason you are talking about The Rain of Colorless Fire. I am an old Greyhawk fan but I was talking about one of the OSR blogs where they were going to use it as a sandbox campaign recently. Not sure who it was though.