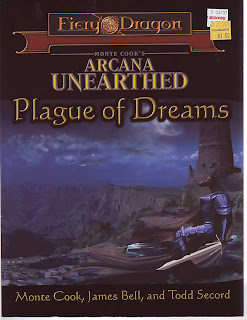 This is the first adventure in the Diamond Throne setting which is the default setting for Arcana Unearthed. Since I am not much of a D20 or 3.x player this is something that I have not had a chance to play in or run anyone through. It is most likely that I never will use it as is but I will be more than happy to mine it for ideas and from what I have seen the material is good.

By now many people who happen upon this may have played it but in the off chance that there are some who see this who might yet play in it I will refrain from talking too much about the specifics of the module. The adventure is a standard enough fair and should run first level characters to third level or so depending on how things go for them. The adventure uses the town of Gahanis as the backdrop for the adventure and this would be a fine base of operations for a few more adventures after this one.

The module itself is broken down into an introductions, six chapters that make up the meat of the module and then two appendixes. The first is one that has stat blocks and consolidated information for the DM and the other is the legal information connected with the OGL. The module does include a number of new (at that time) monsters and magic items.

The layout of the module is done well enough though I found the text a little too small and tight for my aging eyes. There are also some places where the page backgrounds caused problems reading the text. The art in the module is used in a quantity that is not too overpowering. The quality ranges from better than average to quite good in my opinion but your mileage may vary. To me perhaps the best part of the module is the cartography. The maps in the module are all well done and should be easy for the DM to read and use.

Enter the abandoned fortress, track down the bandit spies, retrieve the treasure and collect the reward. But this simple task is only the first piece in a complicated puzzle, the first step in an adventure filled with intrigue and betrayal, where answers fade faster than ancient memories.

As the larger picture comes into focus, the heroes realize that a more complex mystery is at hand, focused on far more than some stolen treasure. When allies become enemies and simple assignments become epic struggles, the characters will have to tread carefully as they navigate between deadly bandits and dangerous outcasts. Will the heroes act as unwitting pawns in this contest of wills, or will they succeed despite the odds and prevent the plague of dreams?"

An adventure for four 1st level PCs.
Posted by Wymarc at 9:36 AM