D20 What Lurks Beyond 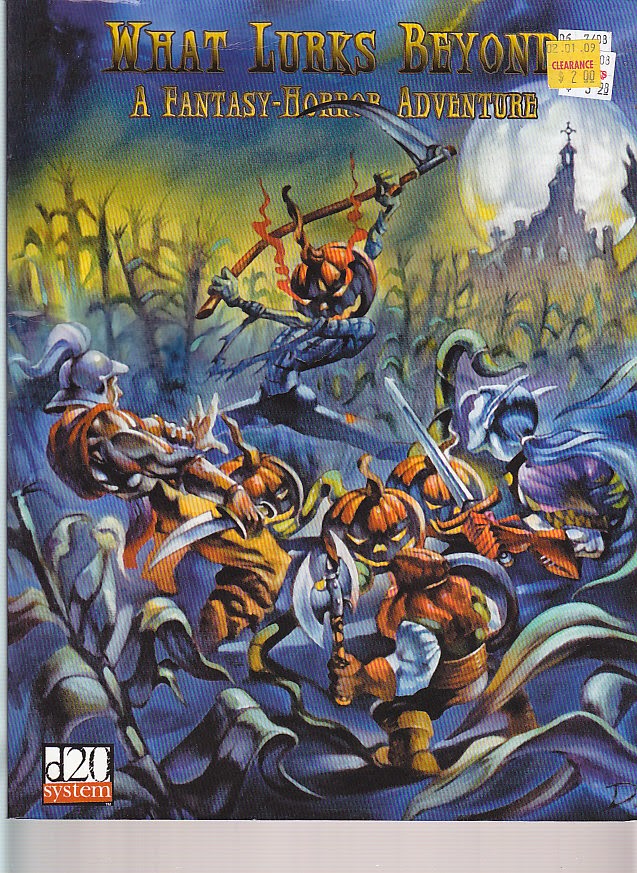 An uneventful journey takes a turn for the worse when you stumble upon the remains of a carriage; its passengers long dead and forgotten. But this is only the beginning, as you are drawn deeper and deeper into the mystery of the ruined city of Bladesedge.

To the East a tall tower stands in dark, foreboding ruins guarding against an ancient evil that now stirs again; to the West the lonely remains of the city lie forgotten by all but the dead. To the North there is a cemetery where you will have to search more than just graves and tombs to unearth the secrets of this loathsome place.

What Lurks Beyond will draw characters into a realm of dark secrets and sinister plots. They will explore crumbling towers, subterranean lairs, ancient ruins and places best left forgotten. They will have to solve riddles and dodge deadly traps. They will have to hide from the terrible creatures that stalk them while trying to find the one man who can stop this evil – a man who by all accounts has been dead for years.

Features:
More than 90 pages of adventure
Over 30 player handouts and maps
Multiple paths for characters to follow
Sub-quests and mini-adventures
Multiple areas to explore
Explore ancient cities, cemeteries, subterranean dungeons and crumbling towers
Includes more than 30 different monsters and foes – all detailed and illustrated
Riddles for players to solve
Sub-games for even more entertainment
Campaign caliber adventures that Players will remember for years
Written for the d20 system and Deathstalkers
Posted by Wymarc at 2:29 AM