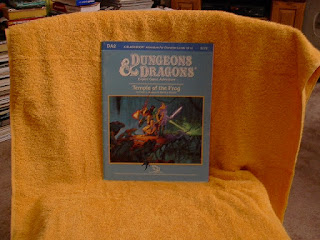 Among those who have dropped from sight in this arboreal hell is young Rissa Aleford, one of Blackmoor's most important leaders. Carried off to the sinister City of the Frog, she is now being held by the eccentric Monks of the Swamp. By making the baroness captive, the deranged monks have seriously weakened Blackmoor at a time when enemies already threaten it from all sides.

Yet, even as the Froggies gloat, the king of Blackmoor dispatches a small band of bold adventurers to the rescue. Deep into the Great Dismal Swamp they must go - far from sunlight and sanity - there to seek and save the captive baroness from the foul Monks of the Swamp. There to find - the Temple of the Frog."