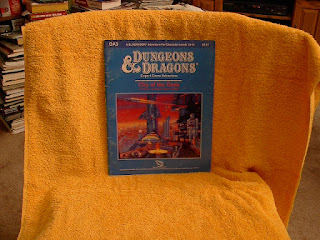 "New Magic... That's what the flying egg has. New magic unlike any ever encountered in Blackmoor. New magic of a type that could give the fledgling kingdom an important edge in the wars that are brewing on its borders.

There are only a few minor problems. Like the fact that the magician who piloted the metal egg to one of Blackmoor's southern outposts was killed before he could utter a word. And the fact that Blackmoor's sworn enemies, the monks of the evil and eccentric Order of the Frog, are also interested in the magic represented by the egg. And, most important, the fact that the egg came from the distant and dangerous City of the Gods.

Set amidst the blistered salt flats of the Valley of the Ancients, the City of the Gods is a strange and deadly metal metropolis whose powerful guardians do not welcome intruders. Yet it is to this place of deadly menace that Blackmoor's leaders now send a daring expedition - to bargain for aid in the coming wars - or to steal the magic of the gods."