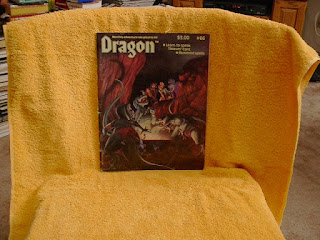 From the editor-in-chief's description of the issue:

We've heard it said that the best way to get ahead in this world is to keep your ears and eyes open - and your mouth shut. Certainly that axiom applies to the adventurers in Paul Sonju's cover painting, and it's also good advice to follow with some of the articles in this issue. With languages, for instance, you've got to look and listen before you can learn to speak. And, when confronted by an illusion, what you see and hear (or don't hear) is a lot more important than what you say.

You can enhance the use of languages in your D&D or AD&D adventuring by using this issue's special inclusion - a dictionary of Thieves' Cant vocabulary that you can fold and trim to fit in pocket or pouch. To go with it, we've assembled a special section of "language lessons" you can use to add more detail and more flavor to that aspect of your campaign.

By their very nature, illusions (and the characters who cast them) are always subject to interpretation. Inside you'll find a couple of articles suggesting how to keep illusions and illusion-casters in proper perspective. Immediately preceding those stories is an extra-long edition of From the Sorceror's Scroll, wherein Gary Gygax unveils twenty-six new, official spells for illusionists in the AD&D game.

An edged weapon has two sides - and so does the debate over the weapon-use rules in the D&D and AD&D systems. Both sides of the topic are examined at the start of our feature section, with John Sapienza advocating an alteration of the rules, and Bruce Humphrey offering his rationale for why the rules are fine just the way they're written.

For the thousands of ELFQUEST fans, and the thousands who have yet to discover Cutter and the rest of the crew, we present the principal characters in the saga described in AD&D terms - illustrated with full-color portraits by Wendy Pini.

In Featured Creatures this month, Gary Gygax fills out the family of geniekind with official renditions of the marid, dao, and jann. In Leomund's Tiny Hut, Len Lakofka offers some of his creature creations - intriguing low-level monsters guaranteed to make even high-level characters use their wits instead of just their weapons. - KM