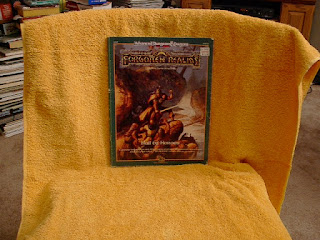 The FORGOTTEN REALMS fantasy world has been the site of many great adventures and home to countless valiant heroes and infamous villains. Many a talk of derring-do has been recounted in novels like the Moonshae trilogy by Douglas Niles, The Crystal Shard by R.A. Salvatore, Azure Bonds by Kate Novak and Jeff Grubb, and Spellfire by Ed Greenwood (creator of the FORGOTTEN REALMS fantasy world).

Until now, the characters from these FORGOTTEN REALMS novels have been unavailable to AD&D game players. But no longer.

Hall of Heroes provides complete histories and AD&D game statistics for such beloved characters as Elminster, the greatest sage and magic user of the Realms, Tristan Kendrick and Robyn of the Moonshae isles, Wulfgar the Barbarian, Drizzt the dark elf, and Bruenor the dwarf, all from the northern reaches, plus Alias and Dragonbait, Shandril and Narm Tamaraith and many more.

But the Hall of Heroes is more than a listing of game statistics: It's also a sourcebook describing (among other things) artificial and magical lifeforms of the Realms, as well as the lives of the world's elves, dwarves, lizardmen, and exotic creatures

Whatever your interest in the FORGOTTEN REALMS campaign setting, you'll find much to entertain and intrigue you in this volume.