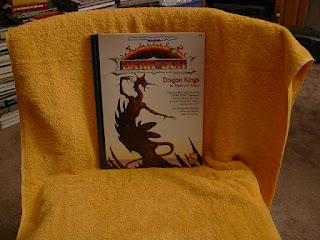 EXPLORE THE 10TH LEVEL OF MAGIC.

Only the most powerful characters are destined to rule Athas. Warriors with vast armies of followers campaign for glory; rogues become masters of illusory magic to further their deadly schemes; spellcasters who can also master psionics open whole new tomes of magic available to them - the most powerful spells ever! And not only do they gain greater magic, the spellcasters take on entirely new forms when they advance beyond 20th level - clerics can attain elemental form; preservers mutate into magnificent avangions; defilers can actually transform into dragons themselves! Learn of these advanced beings, the new magical spells available to them, plus new psionic devotions and organizations, military vehicles and army lists, and more, all within the pages of Dragon Kings!