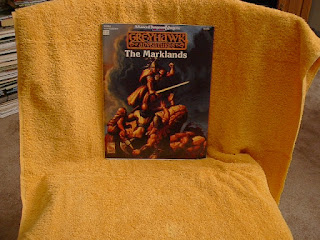 "In the wake of the Greyhawk Wars, kingdoms are struggling to survive. Beset by the hostile forces of Iuz, and the twisted soldiers of the Great Kingdom, the world's two greatest forces for good must strive to save themselves from overwhelming evil.

The Kingdom of Furyondy, rent with internal disputes, struggles to construct its northern defenses before Iuz can attack again. Southern lords protest against paying to protect northern lands, while others call for an end to the Pact of Greyhawk and all out war to recover Furyondy's lost territories.

In Highfolk and the Vesve Forest, hardy woodsmen ally with elves and gnomes to resist invaders in their homelands. The grey elves of the Lands of the Timeless Tree watch and bide their time, while the bold independence of the forest people works against them in resisting evil.

In the Kingdom of Nyrond, dissenting nobles rebel against the ancient authority of their sovereign. King Archbold must impose ruinous taxes on his people to save the realm from enemies which ring it on every side. While the forces of evil bide their time, secret forces gather to put another in Archbold's place.

The free states of the Flanaess are desperate for aid from any quarter. This is the time for heroes to take up the cause of good and come to the aid of the great and the wise."