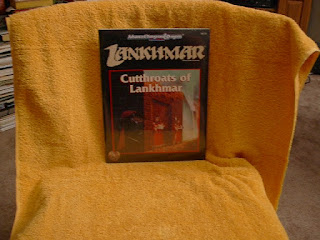 Not all the rogues in the city of Lankhmar are found in the Thieves Quarter. Some of the nastiest scoundrels are bankers, merchants and craftsmen. Discover the true cutthroats of free enterprise and the backstabbing business practices in the City of Adventure.

Cutthroats of Lankhmar is the second in a series of three gazetteers focusing on different sections of that most famous City of Thieves: LANKHMAR. Set in Fritz Leiber's NEHWON, the ofttimes home of FAFHRD and the GREY MOUSER and the site of their many heralded exploits, Cutthroats describes in vibrant detail the Mercantile, Festival, Park, Cash and southern River Districts of the City of the Black Toga.

This gazetteer not only provides information about the denizens of Nehwon's most important city, it also features dozens of springboards for adventures that span every level of Lankhmar society from the nobility to the dregs.

Learn all about the gangs, guilds, fences, ships, merchants, and bars in the southwestern portion of Lankhmar. You may never look at the city of Lankhmar the same way again.