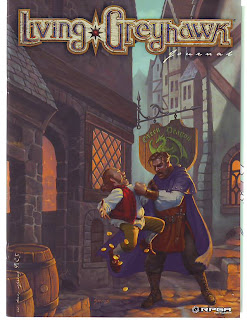 At some point in time I joined the RPGA though for the life of me  I do not recall when it was. I know it was before November of 2000  but I am not sure how much before that. I am certain it was  strictly for the modules that they put out for belonging. It was  not early enough to have gotten any of the REALLY nice modules  though. I have a few of the later ones but the specifics again  escape me.

It was in 2000 that they started sending out the Living Greyhawk  Journals. To have gotten these had eclipsed any joy I got from  getting the modules that were released, again since I did not get  any of the original modules they released by in the early 80's.  The Journals short lived as stand alone publications but then  again the to quote Tyrell from Blade Runner "The light that burns  twice as bright burns for half as long...". The six issues they  released were all great.

The issue that stands out in my mind is the one above. Issue #2  was not the best for the article content. Though this was great  information the real gem here was the insert that came with the  magazine. This is the issue that came with the poster map of the  City of Greyhawk. The map was keyed and the magazine also featured  the information of the keyed items so the content was essential as  well.

The magazine articles even without the map will make the Journals  worth having.This issue had some great material on city as well as  material for the Living Greyhawk Campaign. The articles contained  in this issue are below:

All of the stand alone issues of the Living Greyhawk Journal (0-5)  are worth picking up if you are a Greyhawk fan. I hate to single  out any one issue to pick up because all were good and what makes  this one great for me may not be what works best for you. The map  is a great item to have so if you are picking up issue #2 please  make sure it is included.

By means of this spell the magic user is able to summon a merchant to their location. The merchant summoned will belong to the same race as is summoned by the Summon Exchequer spell. The summoned merchant will be able to sell items as well as purchase them.

The merchant summoned will buy any item that they are offered though they are shrewd negotiators. The base price that is paid will never be more than 50% of the listed value of the item that they are purchasing. The price can be adjusted by the Reaction Adjustment based on the sellers Charisma stat. This amount will be adjusted by race though. Gnomes, Halflings and Dwarves will get the full benefit. All other races besides Humans will get half the amount. Humans will receive no benefit.

The merchants will also sell items. The exact items available is always up to the discretion of the DM but as a base the Basic Equipment List in the 1e PHB would be a good baseline. The merchants will not have any living creatures for sale ever though. The amount charged can be role played if desired. If not then the merchants will charge a base five times what an item normally costs. This is not affected by the Charisma but will be by race. Gnomes, Halflings and Dwarves will be charged 50% less than the 5x amount. All other races besides Humans will pay the full 5x amount. Humans unless the players role play it out will pay the 5x amount plus an exaggerated amount left to the DM's discretion.

Disclaimer: The spells that you will see, for how ever long the write ups last, were all written up or conceived of back in the 80's so the terminology may not appropriate for anything other than 1e and depending on how well I did back then it may be slightly off for that as well. If there is any duplication of spells that exist now it is most likely I wrote mine first :) Please feel free to comment on them but try not to be too hard on me. If anyone wishes to use these in anything they print please let me know in advance and all I ask is proper credit.
Posted by Wymarc at 6:52 AM

The map for #2 was adapted by Denis "Maldin" Tetreault. On his site (melkot.com) you can find the file for this map and his adaptation of the "blueprint" map of the city's undercity. Maldin even had plans to finish out all the keyed sections of the city, but thats a project for another day...

Maldin did create a map naming all of the streets found within Greyhawk, as well as a few outside the walls.

He may make that "public" before long.