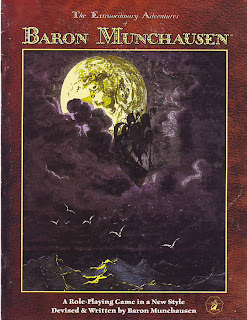 My introduction to Baron Munchausen was via the 1988 movie by  Terry Gilliam called the Adventures of baron Munchausen. I know  the movie is not for everybody but I fell in love with it. I am  not sure that I like it as much as Time Bandits but that is  another story all together.

This is a game I tried to pick un without having to spend too  much money for a long period of time. It seems to go for more  than one would expect and I was finally able to pick it up. This  is the first edition and is much smaller than the later edition  which I have not had a chance to see. As is often the case though  I have not had a chance to play it as of yet.

This is not your traditional role playing game. It is much closer  in nature to Vampire than it is AD&D. There is no dice rolling or even true combat in the game except what is told by the players. It is  often called a story telling game and that is exactly what it is.  A great aspect of the game is that the rule are written in  character as if the good Baron is explaining things to you.  There is a great review of the game in character here. It is for the newer edition of the game but the basics are still the same.

The game is each player trying to spin the best fanciful story  while the other players try to interject on a limited basis  things to complicate, discredit or lessen the story. It is one  that would perhaps best be played with a free flowing quantity of  alcohol at the table. It is not one that can played by everyone  though. Players have to be creative, have a flair for the  dramatic and be able to think on their feet when it comes to  telling a story. I could really see this as a game that DMs play  together in the dark corner of some tavern at a large convention.  This game would also suit itself to play via the online Google+  functionality possibly.

If you can find a copy of the game I would suggest picking it up.  There rules are not really needed past a certain point as it is  fairly straightforward. If anyone ever decides to have a pick up  game on Google+ I would love to hear how it goes.

"A Game of Wagers, Wine, and Competitive Lying"

Players, preferably gentlemen from good families, challenge one  another to recount, as outlandishly as possible, their many  exploits, occasionally wagering against the narrator's ability to  incorporate complicating circumstances into the tale.

"The Extraordinary Adventures of Baron Munchausen contains a full  set of rules, background, more than two hundred adventures ready  to be played, a revolutionary system of mechanics that does away  with dice or cards and uses money and fine wine instead, two  combat systems ('duelling' and 'duelling for cowards'), quick- start rules and a great many insults against the inhabitants of  various nations, but principally the French. This game can be  learned in under five minutes, requires no GM or preparation, and  takes about an hour to play. You will require pencil, paper,  imagination, a manservant, money, a selection of fine wines,  noble blood, a sense of flamboyance, and at least one attractive  member of the opposite sex (optional)."

When this spell is cast the magic user is able to create an  protective shield on the exterior of a room. This barrier does  nothing more than prevent any sort of coin from leaving the  confines of the room. For the purpose of this spell bullion and  raw precious metals would be treated as coins.

The spell as stated above will not allow any coins to be cross  any threshold of the room. The spell is not powerful enough to  prevent actions such as the teleportation of coins but nothing  that requires the physical transport of the coins will work. This  will even apply to coins that are out of phase.

Coins can be brought into the room with no problem but once  inside they can only be removed with the knowledge of a special  command word and even then within limitations. The spell will  allow any other item though to removed from the room without  problem including gems and jewelry and magical items unless they  are coins of some type.

The individual who cast the spell will have an individual coin in  the room that has a command word appear on it when the spell is  cast. The command phrase can only be seen by use of a detect  magic spell being cast directly on the coin which will make the  phrase appear. By use of the command word an individual can  remove a number of coins equal to 100 times their intelligence.  This ability will only work once per day and no more than three  times in any given week. Each time it is used there is a 5%  cumulative chance that the command word will change and appear on  another coin. It will be physically impossible short of a Wish  to ever remove the coin with the command phrase on it from the  room.

The material component of this spell will be the coin that has  the command phrase on it. The coin will be magically mixed among  any other coins in the room.

Disclaimer: The spells that you will see, for how ever long the  write ups last, were all written up or conceived of back in the  80's so the terminology may not appropriate for anything other  than 1e and depending on how well I did back then it may be  slightly off for that as well. If there is any duplication of  spells that exist now it is most likely I wrote mine first :)  Please feel free to comment on them but try not to be too hard on  me. If anyone wishes to use these in anything they print please  let me know in advance and all I ask is proper credit.
Posted by Wymarc at 6:01 AM

I really dig that movie as well. I always pictured my Epic campaigns as an over the top adventure like this one.