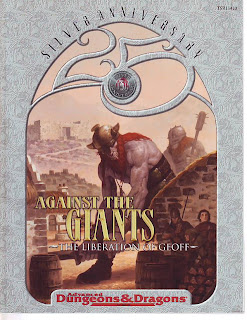 Against the Giants - Liberation of Geoff is one of the 25th Anniversary module  that were released by TSR back in 1999. This one unlike White Plume and Keep  include versions of the original modules that inspired them. They are not the  exact originals but versions that have been modified to be compatible with the  2e game. I would have thought it better to have included exact reprints but one  takes what they can get. The original modules are classics and I won't discuss  too much of them as I would prefer to write about the originals when the time  comes.

The second half of the module is the "Liberation of Geoff" portion of the title.  The premise is that the land of Geoff, located east of the Crystalmist  Mountains, has been occupied by giants and their allies for eight years. It  falls upon the player characters to help defeat the giants and surprise,  surprise liberate Geoff. This section of the module has some good information in  it and makes for a good adventure. The problem that it is not nearly the  adventure that the first half of the book is.

There are no less than 16 towns and/or forts described in the second half of the  module. These could be used even if the module is not played so it provides  information that can be used outside the module which is always nice. The module  provides the DM with three new magic items and a new monster the Horag which is  the result of the union of a hill giant and an ogre. The module includes a  section on giant names which can be used outside the module as well.

In the end this module si a good one to have. I am not sure I would ever use the  second half but the module is one that is worth running. Add to that you have  some version of the three giant modules helps make this something to own. There  are other modules I would seek out first and I would not pay a huge amount of  money for this but if you can find a reasonably priced copy you should pick it  up.

"A decade ago, the land of Geoff was overrun by a horde of giants, ogres, and  evil humanoids, its people either slain, enslaved, or driven into exile. Now at  last the tide has turned. The time to free the people of Geoff from their  servitude to the giantish tyrants has come! But don't forget to watch your step  when you confront the true masters behind the giant clans!

Details eighteen new encounter sites in the war-torn land of Geoff, linked  together to form a grand campaign.

Provides dozens of hours of gameplay as the heroes struggle to free an entire country from the grasp of giant overlords."

By means of this spell the magic user is able to determine the age and point of  origin/creation for any item. This spell will not provide nearly the information  level of a Legend Lore spell but will give the caster something to start with.

The casting of this spell requires that the caster be in physical contact with  the target of the spell. This may in some cases cause the caster to suffer  effects from the target. There is also a connection made between the caster and  the item. There is a percentage chance equal to the xp value of the item in  thousands (1,000 = 1%) that the interest in the item by the caster will be  noticed by someone or something from the items past. If the item remains in the  caster possession this will become a cumulative chance per week of possession.

Disclaimer: The spells that you will see, for how ever long the write ups last,  were all written up or conceived of back in the 80's so the terminology may not  appropriate for anything other than 1e and depending on how well I did back then  it may be slightly off for that as well. If there is any duplication of spells  that exist now it is most likely I wrote mine first :) Please feel free to  comment on them but try not to be too hard on me. If anyone wishes to use these  in anything they print please let me know in advance and all I ask is proper  credit.
Posted by Wymarc at 10:18 AM