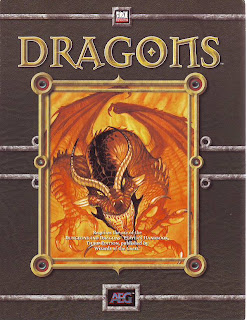 I recently wrote about the Draconomicon and had some concerns  about the way it portrayed and handled dragons. I still believe  that a character should be able to go their whole adventuring  life and never see a dragon. Even though the game it was designed  for has it in the name encountering a dragon should be a  memorable event in both magnitude and rarity.

I think Dragons by AEG does a better job than Draconomicon. It is  still a D20 splat book by any other name though so it is not  something I am ever going to be in love with. The book is filled  with both good and bad but the good is better than the best in  the Draconomicon and the worst is either on the same level or  marginally better.

The book has some great sections that even if you never encounter  a dragon that the DM can use for their game. Dragons as magical  beasts have always been as much a treasure as the piles of coins  and items they guard in their horde. The sections on Dragon  Alchemy and From the Belly of the Dragon both offer ideas on how  a dragon could be turned into valuables even if they never have  any coin.

The book also has sections that will help make the encounter with  the dragon much more deadly and memorable if that type of  encounter ever were to happen. The book lays out sections on  Dragon Tactics and Dragon Lairs which will help give the  encounter the added touch to help turn the dragon from a monster  to an epic foe. The sections on Dragon Magic and Dragon Artifacts  can be pillaged for ideas if a dragon is ever encountered or not.

As I suggested the book has it's bad points as well. The prestige  classes though not all bad have an option for characters who have  dragon in their bloodline. I guess no one would ever want to play  that now would they. I can be normal or I can come from a line of  mythical beasts and have great power. Sign me up for option  A...not. I won't go into the section on Playing Dragon  Characters. There are other portions of the book that I can't see  a use for or find distasteful but I think the book overall is  worth trying to talk positive about.

I have found the AEG products to be well done and think they can  transcend the 3.x limitation and be used for almost any system in  some manner. They can still be found quite easily in the secondary  market and for prices much cheaper than the cover price. I think  this book in general though would be a worthy addition to a DM's  library.

This sourcebook contains everything a GM or player needs to  campaign in a world of dragons. Hunting, training, or riding them  - even cutting up the pieces and selling them for alchemical  powders - all these possibilities lie within the pages of this  tome. Carry well the knowledge you have been lent.

When this spell is cast the magic user causes the vision of the  affected creatures to twist. This will have the effect of causing  them to see things other than they really are.

The spell will cause those affected to see the casters party as  members of their group. The reverse will also be true in that they  will see their group as the casters group. The victims vision  will fade for the two segments while the spell is being cast and  then restored with the twisted vision.

Those affected by this spell will be allowed an initial saving  throw though this save will be made at a -2.  As action proceed  the affected will be allowed a new save each time something  occurs that might suggest things are not what they seem and these  are made as normal saves. Once one individual has made their save  a +1 per person who has made a save is added to any other  attempted saves.

At no point is the caster's party affected by this spell unless  it is cast by another magic use in the opposing party. If this  were to happen the DM will need to make a roll each round to see  what spell is affecting each person if both parties are affected.

Disclaimer: The spells that you will see, for how ever long the  write ups last, were all written up or conceived of back in the  80's so the terminology may not appropriate for anything other  than 1e and depending on how well I did back then it may be  slightly off for that as well. If there is any duplication of  spells that exist now it is most likely I wrote mine first :)  Please feel free to comment on them but try not to be too hard on  me. If anyone wishes to use these in anything they print please  let me know in advance and all I ask is proper credit.
Posted by Wymarc at 7:56 AM