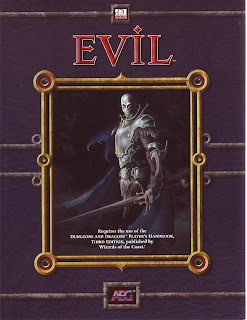 "No man chooses evil because it is evil; he only mistakes it for happiness, the good he seeks." - Mary Wollstonecraft

Evil by AEG is one of those books that I think every GM needs in their library of reference material. I think it makes an excellent companion to the "Complete Book of Villains" which I have written about in the past. I don't think of this as it's equal but more of a top notch sidekick.

The warning on the back can be a little scary for any that have ever read the Adult Content sticker on the Book of Vile Darkness. Let me assuage any fears that this book might go as deep as the other in it's exploration of evil. I guess the emphasis on the other should be that it's title is vile darkness. I think this book is more of a top level view of evil and not an expose on the depth of the darkness that evil can bring.

The book is divided into two sections. The first of them is the portion exploring why evil exists and how to create evil characters. I have been in a few evil campaigns and have never much cared for them. I have found they quickly become a contest to see who can commit the greatest atrocity. I would instead suggest that this can be sued best for the construction of believable in depth villains for the campaign.

The second section is intended to help the GM create and run an ongoing evil campaign. This is again something I would not ever find myself participating in again. I guess I like my games more on what would be considered the traditional side of heroic fantasy. I understand the desire for the other and one can hardly understand good without knowing something of evil or so I would think. The GM can use this though even in a good campaign. The information could be used to make a richer more detailed setting for adventures where the heroes venture to fight.

This book does touch on some dark themes though and it is not something I would suggest letting younger children read. Not that it has anything that they have not seen on network TV or the news but that it puts for evil in a way that it can almost be accepted and understood. The writes did a good job of injecting material that would warn readers that what is being said is wrong but a less mature more impressionable reader might miss those.

I again think that this is a worthy acquisition for any GM and it can be used as intended or as a sourcebook for how to create better villains. It belongs next to the Complete Book of Villains and also beside in many cases the Book of Vile Darkness. I think the last book has uses also it is just a little too explicit for the average reader.

This is a Descent into Darkness

This sourcebook contains everything a GM or players needs to design imposing villains and use them to thwart the efforts of heroes everywhere. Join the crusade for tyranny, injustice, and oppression, or give your campaign's villains an extra edge.

The text within this book is not for children. It is a journey from which you can never come back.

Just Remember, You Were Warned

By means of this spell the magic user causes a single object to  become enchanted. The enchantment will cause any who look upon it  while trying to locate it to see it as something else. This spell  has no effect on the caster trying to locate the item.

The purpose of this spell is to allow the caster to keep an item  of value that they may need to use on a regular basis out in  plain sight where they can get to it easily. The spell will cause  any looking for the specific item to see it as something other  than what it really is. It may appear as the same basic item but  one of much lesser value or importance.

This spell cast on the magic users spell book would allow them to  keep it lying on the table in their workroom. Any that might come  looking for it would see it as say a treatise on dung beetles or  the like. The spell will also cause those looking for the item to  forget that they may have seen it before as the actual item when  not looking for it.

This spell will remain in effect on the item until such time as  someone actually find the item while looking for it. There is no  initial save versus this effect. If anyone picks up the item and  examines it for more than two rounds while looking for the item  they are entitled to a saving throw though. Each round spent  looking over the item entitles them to another saving throw.

Disclaimer: The spells that you will see, for how ever long the  write ups last, were all written up or conceived of back in the  80's so the terminology may not appropriate for anything other  than 1e and depending on how well I did back then it may be  slightly off for that as well. If there is any duplication of  spells that exist now it is most likely I wrote mine first :)  Please feel free to comment on them but try not to be too hard on  me. If anyone wishes to use these in anything they print please  let me know in advance and all I ask is proper credit.
Posted by Wymarc at 7:07 AM

I agree, this is a great book and goes along well with Monster, also by AEG, that was better than Savage Species in many ways, but without the slick art.