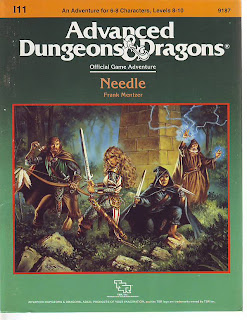 Needle is an adventure that people seem to love or hate with  little room in the middle. I am not sure why this is but I never  hear it is OK all that often. People talk about how much they  like it or how much they hate it when I bring it up. I am one of  the people who are in the middle on it though.

I like the module as a whole and generally like anything that Mr.  Mentzer does. The module started as a GenCon tournament module  with three rounds. This may be part of the reason some dislike  it as tournament modules by design can be a little railroad'ish. I rarely keep a module as designed so this is not something that  bothers me.

The fact that it was a three part tournament module makes it easy  to break into sections. This allows the module to be run amongst  other items if the DM wants to. There are specific easy breaking  points in play that will allow the DM to even end the module if  the players end up not liking it. The three parts are different  enough in scope and feel that this may cause some concern for  players and the DM though.

The plot of the module is not in and of itself all that unique  but combined with the setting, the details and some of the locals  the module is different. This may be something that will put off  some players and some DMs. I can understand this in a way asn I  am going to have a spoiler moment here. I loved S3 to no end. The  idea was great and I love the idea of finding technology in small doses. I do not like it as much as it has been used. I can see  how this might put some off.

My only other complaint about the module is the names that were  assigned to the pregenerated characters. I know this is a minor  item but in my opinion it detracts from the module and makes it  seem less serious. This also extends to a few of the NPCs used in  the module. Nothing against the state but I am not sure Montana  is an appropriate name for a fantasy character. If there is some  other ise of that name other than a state I will retract this  concern.

In the end the module has enough to offer that I think it is  worth picking up. At one time it was available for free as a  download on the TSR then WotC site. Any links to it that I have  found recently do not work. If anyone knows of a good link to it  still they might want to share it. Even if you can't get it for  free it usually not cost prohibitive to buy it still.

"The king's notice asked for adventurers to undertake a mission  to a far land. It was marked with the rune for "high danger, high  reward" so of course you volunteered.

The king has heard of a great obelisk that towers over a ruined  city in a far country. He wants to know more about the obelisk  and its strange powers. Your job is to find the obelisk and bring  back a report to the king. The mission seems absurdly  easy...until you reach the jungle.

Don't think the king is through with you if you get back to the  capital city alive. You haven't seen the last of that jungle yet.  Is a share in the spoils of an ancient civilization worth the  risk?

By means of this spell the magic user is able to create a  permanent magic weapon in a very short period of time. This  ability is done at a painful personal cost to the caster though.

The magic user will be able to create a weapon up to +3 in nature.  They can also assign it other abilities based on spell that they  may have access to. All of these options will cost the caster in  some fashion.

The caster will permanently lose 2 hit points per plus that the  weapon is assigned. These hit points may be replaced as the  caster rises in level but nothing short of a Wish would replace  them and then at a cost of one Wish spell per two points. The  caster will also lose one point of constitution total with the  casting of this spell. This can be replaced though lesser means  than a Wish though.

If the caster wants to grant other abilities to the weapon then  they will need to base these off of spells that they have in  their repertoire though they do not need to be memorized. The  caster can put no more than three different abilities into the  weapon in this manner. Doing so is at great peril to the caster.
Each additional ability can be used once per day and the caster  has a 50% chance of losing one point of intelligence while  placing the spell ability. The caster can increase the number of  times per day (up to three) the ability can be used though this  will make the chances of losing a point of intelligence 100% and  then 200% (meaning they lose 2). Any points lost by the caster  are permanent and may not be restored short of a Wish spell.

Finally with this spell there is a 5% cumulative chance that the  soul/spirit of the caster will be pulled into the weapon. If this  occurs then the new weapon is treated as an intelligent weapon  with the intelligence and other attributes based on the caster's  information. Anyone possessed by the sword will be controlled to  find a means of releasing the caster. The DM will need to arrive  at some quest line to accomplish this as even a Wish spell will  not release the caster.

The material component of this spell is the weapon that will be  enchanted. There are no special requirement about the quality of  the weapon though. Any weapon can be enchanted regardless of  quality and type.

Disclaimer: The spells that you will see, for how ever long the  write ups last, were all written up or conceived of back in the  80's so the terminology may not appropriate for anything other  than 1e and depending on how well I did back then it may be  slightly off for that as well. If there is any duplication of  spells that exist now it is most likely I wrote mine first :)  Please feel free to comment on them but try not to be too hard on  me. If anyone wishes to use these in anything they print please  let me know in advance and all I ask is proper credit.
Posted by Wymarc at 7:35 AM

Good review of this classic. I'm still searching for Needle for my collection. I don't buy from Ebay, I like to hunt at conventions (hobby within a hobby).