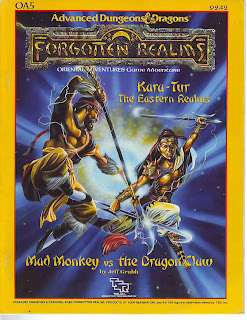 Mad Monkey vs the Dragon Claw - OA5 is a module that was available online for a period of time  through the TSR web site. Like all the other links to the free  material this one no longer works. If anyone knows if there is  still a valid link to the site and the module it would be great  to hear about it.

I do not want to give too much of the module away but this is  most definitely one that I would enjoy running as a DM. I would  also most likely enjoy it as a player. I have used similar plot  tools in adventures I have designed. I am not saying that this is  any way unique though. Just that sometimes things are not what  they seem.

The module is one that can be played at the beginning as a very  light hearted adventure that end up growing into much more than  it started as. Depending on the play style of the group and the  DM this module should be good for two to four sessions. If there  is no side treks and the sessions go smooth two would not be a  problem. I think the module could actually be expanded and turned  into a pseudo campaign that could go for even more than four.

If you want to run something in the OA line this would be a good  module to use. If you can find a link to the free version the  price is most definitely right.

The followers of the many gods of Kara-Tur have always fought, to  prove the superiority of their martial discipline and the greater  wisdom of their deities. The strict hierarchy of the gods is now  threatened by the sudden prominence of the followers of the  Dragon Claw, a new and deadly school of martial arts that  threatens to destroy all other schools. The players, recruited by  a mysterious old monk with a bizarre fighting style, must find  out what's behind the emergence of the Dragon claw and put a stop  to it.

Mad Monkey vs the Dragon Claw will take the players across the  entire country of T'u Lung, from the mouth of the great river  Fenghsintzu to its headwaters, where they must deal with the  legendary Cult of the Black Leopard-all in the name of the Mad  Monkey.

When this spell is cast the magic user is granted an extra  sensory ability to know the value of items that an individual  has one them. The ability allows for both cursory and in depth  knowledge.

The spell does not allow the caster to know the exact break down  of any coins, gem or jewelry but an approximate total value. The  value will be plus or minus 1% for every point of intelligence  the caster has less than 24. The same will be true for magical  items. The caster will not know the exact items or their  individual values but an overall value.

Disclaimer: The spells that you will see, for how ever long the  write ups last, were all written up or conceived of back in the  80's so the terminology may not appropriate for anything other  than 1e and depending on how well I did back then it may be  slightly off for that as well. If there is any duplication of  spells that exist now it is most likely I wrote mine first :)  Please feel free to comment on them but try not to be too hard on  me. If anyone wishes to use these in anything they print please  let me know in advance and all I ask is proper credit.
Posted by Wymarc at 5:48 AM