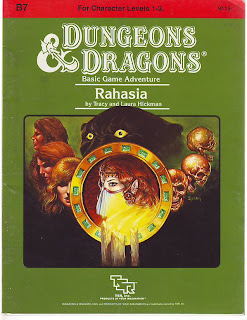 When a module has been printed by two different companies in  three different formats can you can assume one of two things.  That one of the companies had nothing better than to copy steal  another company's work or that the module is just that darn good.  In the case of B7 Rahasia the latter is the case.

Originally published in 1979 by Daystar West Media in their Night  Ventures line Rahasia was written by Laura Hickman and is most  often thought of as the first module written solely by a female  writer. When TSR purchased Daystar West Media they released the  module again in 1983 as the first in the RPGA line of modules. In  1984 it was merged with Black Opal Eye (RPGA2) and released as B7  Rahasia. It also then later appeared in the B1-9 compilation  though I am not counting that as a different release.

The module is different in a number of ways from the other  modules in the B series. The setting of the module though  cantering around an elven village has a very definite Arabic  flavor to it. Another item is that for a very specific reason the  module does not focus on killing things. The focus needs to be on  stealth, roleplaying and creative problem solving. The name of  the module Rahasia is Indonesian for secret and there is perhaps  a reason for that being used.

The module is only 32 pages long but most of it is actually  dedicated to the major area of the adventure. The adventure is  large enough that I would suspect it will last two good sessions  for normal party and it might last even more depending on the  players. There is combat to be had but again the module is going  to focus more on problem solving and players who enjoy combat  more might be a bit put off by some concerns the module will  raise.

I am a fan of most of the B series modules. The level range for  this is not my favorite but all of the B series modules seem to  make it enjoyable enough to be a low level character that I think  that I have run and/or played them all. I would hate to have to  pick which of the B series would be my favorite but I think B7  would have to be in the running is at worst in the top three. But  then they are for the most part all better than much of what is  commercially released today. If you can find this pick it up.


From the back of the module:

Grey Mountain lies deep in the lush elven forest. The temple  there was a haven of meditation and learning - until taken over  by an evil cleric known as the Rahib.

Far under the mountain, he paces before the temple's great altar.  A brown-robed servant rushes in and falls to his knees. Trembling  at the sight of the Rahib's black panther. "Rahib, adventurers  came to the village as the sun rose - the strangers now protect  Rahasia"

A scowl crosses the Rahib's face. "I must have Rahasia! Attack  again tonight." As the servant scurries away, a deep growl rises  from the giant cat.

Gripping the panther's leash, the Rahib paces again, speaking out  load. "We must dispose of these strangers quickly; the secret  beneath the temple will not wait much longer."

The caster will need to pick a point in time that is no farther  back then their intelligence score plus three in rounds  (minutes). When the spell is complete the casters party will  immediately be reset. The part will have knowledge of what has  transpired previously. There is nothing to say that if they  change their course of action that other things won't change as  well. Anything that the party may have acquired in the first run  through the timeline will need to be removed and any items used  restored.

The spell will have some negative side effects though due to the  nature of what it does and the powerful magic involved. When the  party is reset they will need to make a saving throw versus  magic. If they save then they will only be stunned for one round  while those that fail will be stunned and disoriented for two  rounds.

The magic user will not be stunned but will suffer other effects.  They will be aged five years by the powerful energies involved in  the casting of the spell. They will also need to make two rolls.  The first is for the spell itself as the magic for this spell is  bound powerfully to its inscription. There is a 5% cumulative  chance per use that the spell will vanish from the spell book  after casting and will become such that it can't be memorized by that caster for a  period of one year. The other will be a saving throw that if  failed will cause the caster to lose 1d4 points of intelligence.  These will be regained at a point per day.

Tracey Hickman is a man. He did co-write with his wife Laura on occasions.

I wish I had been able to pick this up as a Daystar product when I picked up my copy of "Pharoh". If its like Pharoh the Daystar edition has lots of extras and pen and ink illustrations, not included in the TSR edition.

@Fabian...sad part is I knew that. That is what happens when you write too early in the morning. Fixed it. Thanks for pointing it out for me.

I thought I was an expert on all things D&D, but I had never before heard of the Daystar venture, nor known my one of my favorite modules (Pharoah) had a prior print history.

I've been taken to school. Thank you for this post!