Birthright - The Book of Magecraft 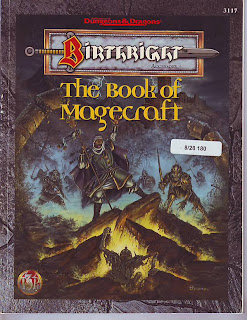 Magic permeates the very air, earth, and sea of Cerilia - yet escapes the mastery of all but a  rare few. Those who control the continent's magical energy can call upon forces  incomprehensible to the rest of its inhabitants. These powerful figures are Cerilia's wizards:  adventurers, advisers, and kings whose spells can affect the destinies of thousands.

This 128-page book contains everything players and Dungeon Masters need to make wizard  characters more distinctive, mysterious, feared, and true to the BIRTHRIGHT setting. Inside are  details on:

The secrets of sources and ley lines.
Strategies for building and maintaining a magical domain.
Spells unique to Cerilia, including new conventional spells, realm spells, and war magic.
Cerilian magical items and Mount Deismaar artifacts.
The status, philosophy, and role of wizards in each of Cerilia's spellcasting cultures.
The unique magician character class and the study of magic in Cerilia.
Near-mythical creatures said to grant boons to wizards fortunate enough to encounter them.

Warriors, priests, and rogues beware: The wizards of Cerilia have come to power!
Posted by Wymarc at 5:05 AM