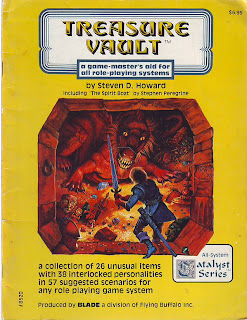 Any product that can provide you with a volume of magical or unique items, personalities associated with them and then plot hooks to get them involved in your campaign is something worth having in my world. Blade's Treasure Vault is just such a product. I have more often than not been impressed with the offerings from Blade/Catalyst and would rate them just short of being on par with most of the earlier Judges Guild offerings. I am not certain if I bought this when it was released but have had it in my collection for some time and have referred back to it for ideas often.

From the Front Cover:

From the Back Cover:

A game-master's aid for all role-playing systems

You've trudged through miles of wilderness, crossed the swamp to end all swamps, fought creatures of the night and monsters of madness and you still have a light purse? Then unlock the doors to Treasure Vault!

These unique items, magical and otherwise, provide a fresh lure to exciting adventures for the most jaded character's spirit. The unusual personalities and tantalizing scenarios make this book a genuine treasure trove of ideas for the game master of any role playing system.
Posted by Wymarc at 8:04 AM