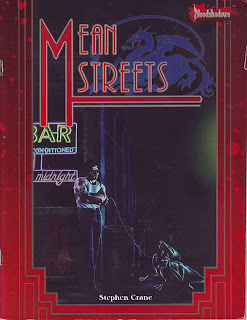 This is a book I remember buying and when it was bought. It was at the last or next to  last of a small convention that had been around for years. Origins had settled for it's  extended and maybe permanent stay in Columbus and that spelled the end for CapCon  apparently as it has never returned. This was sold at the auction that year with one or  two other pieces of Bloodshadows material. I picked it up thinking it looked interesting  and  I was always looking for a new game to play. It was at that convention a buddy told  me about a new card game he tried and a month or two later a mutual friend introduced me  to crack (and by crack I mean Magic the Gathering). Needless to say I never got around  to using the Bloodshadows system or this book.

Take a long trip through the Wilderness or a short trip through a gate and you might end  up in Albredura. You could do worse, you could do better. Albredura's a city of  survivors and cynics, hard magic and cold steel. Trying to turn a profit is tough in a  town where breaking even might not even mean survival.

Mean Streets is a campaign supplement for Bloodshadows, the World of Fantasy Noir. It  contains details on the isolated city of Albredura as well as gamemastering tips for the  Bloodshadows roleplayer.

Mean Streets is a Campaign Supplement intended for use with the Bloodshadows game.