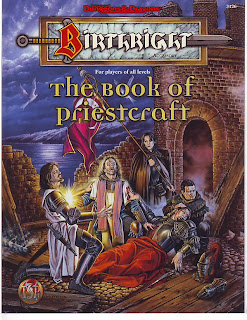 Much of what I said about the Book of Magecraft will be true for the Book of Priestcraft. If  you replace the portions about alternate magic system with pantheons of deities then I could  have almost used what was written again. I have often dabbled with the idea of removing clerics  from the game to see what it would be like or making them a magic user specialty dealing with  life magic.

It would not be a stretch to say that the format used to write up the entries for the pantheon  in this book should be the format used for any similar products. It lays out the particulars of  the individual deity and then provides information on the church and its operation. Next it lays  information on clerics of the order and their limitation and benefits and then it repeats this  for paladins of the order if there are any. It then also lists information on where temples  connected with the deity can be located.

Priests are more than mere physicians tending the wounded and healing the sick - they are  defenders of the realm, champions of their god, and the politicians of Cerilia. Whether they are  ministering aid, performing diplomacy, inspiring the people, or dispersing undead legions of  evil, priests command great power and authority. For the power of the Blood comes from the  gods, and only their priests can make a king!

The Book of Priestcraft describes the devoted followers of the gods of Cerilia, their  philosophies, tactics, and daily duties. It also details new battle and realm spells for  priests, and examines the legend of Cerilian religious relics. This book further explores the  investiture ceremony - the mysterious transfer of blood power from ruler to heir. And it  contains advice to priest regents on diplomacy, ruling domains, waging wars, and beginning  crusades. It's everything a priest must know to build an empire in Cerilia - or even to  survive.

Come, don the robes of the true kingmakers of Cerilia!
Posted by Wymarc at 6:00 AM