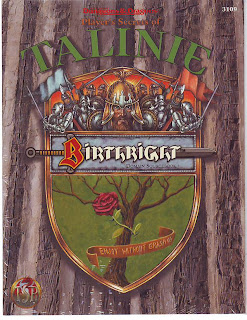 The way that Talinie is described must be what places seem like before the explode into  situations that most people could never have seen coming. Places that seem like everything is  fine and then some event that seems like it should not have nearly the effect it did sends out  ripple effects that shake a whole area. There are places and events in the real world that have  experiences this. Some of these have occurred in the last century and even this one.

Played as the Birthright setting is intended to be played this would be a domain that would not  be taken on lightly as a player. As a setting the turmoil that is brewing right beneath the  surface is ripe with adventure seeds and roleplaying potential. I think this would be an  excellent locale for the characters just below name level to have great impact and set  themselves up to start down the road of becoming a ruler themselves...of course if you are  playing the game as intended that has already happened but where's the fun in that.

To the casual observer, the realm of Talinie seems a pastoral place full of hard-working, law- abiding citizens. But those who look beneath the surface - as a regent must - will see what  lies beneath the beauty.

From the south, a power-hungry archduke has moved troops into two of Talinie's seven provinces,  supposedly as a safeguard against goblin invasion. From the north, greedy guildmasters have  encroached upon Talinie's lush forests and have ravaged large areas for the timber and ores  they yield.

To keep yourself on the throne known as the Oak Seat, you must control these foreign interests  without giving them reason to rise up against you, and at the same time beware of traitors  within your own court - it is whispered that the death of your predecessor was not really an  accident.

A full-color, eight page foldout cover containing detailed maps of the
domain and other  information every Talinien needs.
Facts about the realm's history, geography, economy, and laws.
Descriptions of the major NPCs in Talinie, friend and foe alike.
Secrets and strategy tips to help the new regent manage the realm.

This BIRTHRIGHT domain sourcebook is designed for players who want to take the role of Thane of  the realm, playing either a lawful priest or a paladin. Players of nonregent characters who  live in or come from Talinie will also find this sourcebook useful."
Posted by Wymarc at 6:12 AM