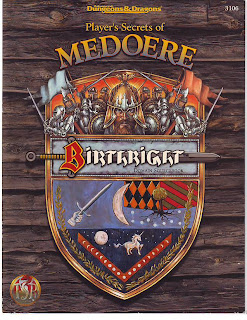 If you are on the same side as the Theocracy playing in one can be a fun and rewarding  experience. If you are not on the same page or in some cases in the same book as the ruling  body then things can get a little dicey. Living in the United States I think we are somewhat shielded from the power that religion can have over the government. I will stop at that and ask  that we not have any real world commentary as a result of that statement. The church in a  fantasy setting can be one of the most powerful thematic elements in story telling if they are  played right. More often than not they aren't played to their full potential though. If you  want to test your players put them in Medoere and have them not be aligned with the church and  run with it.

Ranging from the Spiderfell in the north to the Straits of Aerele in the south, Medoere was  born of faith and the blood of revolution. As regent, you fulfill the duties of Archpriest of  the Church of the Celestial Spell, leading the theocracy to greater heights of glory. The  domain is yours to command--if you have the courage, the conviction, and the blood of kings in  your veins.

This BIRTHRIGHT domain sourcebook is designed for players who want to take the role of  Archpriest. It may also be used by players playing vassals to the regent, or adventurers who  want to explore the mysteries of the theocracy.