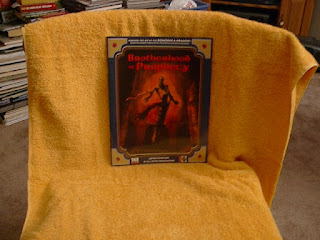 Six months ago, the Brotherhood of Prophecy used it signal mirror to shine a bright distress call. Immediately border troops were sent deep into Ardenwood to assist the monks. Two days later, the distress signals ceased. The guards never returned.

Fearing that the orc and goblin hordes had overtaken the monastery, the Lord ordered his best scouts and soldiers to investigate. That was three months ago. They were never seen again. Additional troops cannot be sent without leaving Tageth unprotected. Lord Grimlee had offered a reward of 1,000 gold pieces to anyone who can reach the monastery and return with news of what has happened.