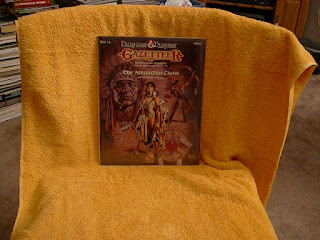 "From the ashes of an ancient culture of proud warriors rises a race of people unlike any other in the Known World.

Long ago, the power of Blackmoor all but destroyed the mighty Azcans. Some of them, the bravest of the brave, sought refuge under the shadow of a great plateau. For decades, they struggled to preserve their lives and their culture. Now, centuries later, their secrets are revealed. From the buffalo hunting Horse Clans and the whaling Turtle Clans to the pueblo dwelling Children of the Bear and the evil Children of the Viper, five distinct Atruaghin Clan cultures are laid out in detail.

The Atruaghin Clans is the fourteenth book in the best-selling Gazetteer series. It provides a complete description of the culture, history, and goals of the noble Children of Atruaghin. Included in this product are: