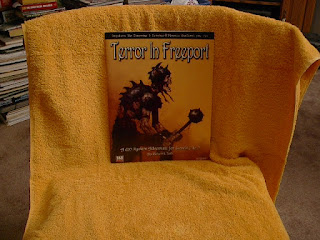 Just when you thought the streets were safe...

As dangerous as the darker parts of the city can be, an uneasy peace has settled over the twisted hive of scum and villainy known as Freeport. Despite evidence of a sinister cult of serpent people masquerading as humans, walking the city's streets, the Sea Lord of Freeport has barely lifted a jeweled finger to actually solve the problem. As evidence mounts that a powerful evil is at work (above and beyond Freeport's normal residents, that is), it is up to your heroes to uncover the snake men's sinister plot and trace the lines of power that lie behind it.

Return to Freeport, city of adventure and intrigue in this sequel to Green Ronin Publishing's hit d20 System adventure Death in Freeport. This adventure, perfect for characters of levels 2-5, provides you with everything you need to further explore the shadowy back alleys and creaking docks of Chris Pramas' grim and gritty fantasy city. Along with a deadly tale of action, investigation, and intrigue, within these pages you'll find information on the Captain's Council and the power structure in Freeport, adventure hooks for continuing adventures, and four pre-generated characters, so you can get right down to business.

Terror in Freeport is the second chapter of the Freeport Trilogy. The events set in motion in the first two parts of this saga come to an action packed climax in 2001 with Madness in Freeport.