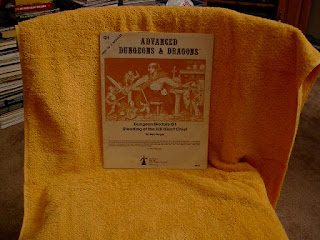 Steading of the Hill Giant Chief is a 1st Edition AD&D module, meant for between 3 to 9 player characters of around level 9. This module is intended to be followed by the rest of the G series (Giant), G2: Glacial Rift of the Frost Giant Jarl and G3: Hall of the Fire Giant King, then followed by the D series (Drow).